Posted on September 4, 2022 by ianhaspinall 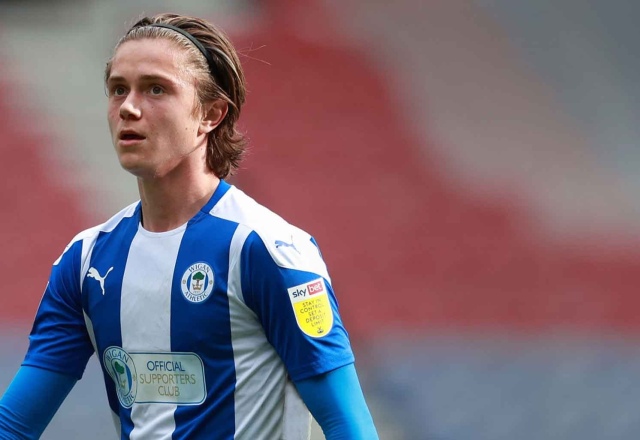 Richardson made one change from Tuesday’s draw against West Bromwich Albion, with Lang replacing Graeme Shinnie.

The hosts were the first to threaten when Adebayo broke into the penalty area but Amos came out quickly and saved brilliantly at point-blank range.

Latics had their first effort on goal two minutes later when James McClean’s volley was deflected wide of the near post.

Lang then threaded a great through ball to Josh Magennis and the striker drilled his low strike against the near post, but the flag had already been raised for offside by the assistant referee.

Amos again came to Latics’ rescue on 34 minutes when Freeman’s powerful strike from 20-yards-out looked destined for the top corner but the former Charlton stopper produced an outstanding save.

Luton continued to press and Amos saved superbly with his feet to deny Morris.

Then from a corner Lockyer headed towards goal but Max Power recognised the danger and cleared his effort off the line.

But the hosts went ahead just before half time when Morris headed Bree’s cross into the top right corner at the far post.

The Hatters had dominated the first half and Latics had resorted to pumping long balls forward to little effect.

It would require a major improvement in the second half if Latics were going to get anything from the game.

Early in the second half the hosts nearly added to their lead when Gabe Osho shot from the edge of the area, but his effort was well blocked by Curtis Tilt.

Latics went close in the 54th minute when Will Keane met McClean’s right-sided corner but his headed effort flew over the crossbar.

Osho then had another chance when he cut in from the right, but his left-footed effort curled over the crossbar.

Richardson decided it was time to make a change in formation and personnel on 62 minutes when he made a triple substitution and went to a back four. Shinnie, Aasgaard and Nathan Broadhead coming on for Jason Kerr, Tom Naylor and Magennis.

The visitors went in search of an equaliser and Aasgaard did well to play the ball to McClean whose cross found Lang at the far post, but his diving header went wide of the target.

Latics were now in the ascendancy and they equalised with 10 minutes remaining through Lang.

Ryan Nyambe showed great strength and determination to win back possession and then pick out Lang whose cross shot deflected off Lockyer and into the net.

The visitors might’ve had a penalty when Shinnie appeared to be taken down in the box but referee Chris Kavanagh waved away the appeals.

Latics looked like they had secured a good point, but things got even better on 88 minutes when Aasgaard produced a touch of Norwegian magic to grab all three points.

The Academy graduate calmly took a touch on the edge of the area before sublimely curling the ball into the top right corner. Cue ecstatic scenes from the away end of the ground.

Luton had a late effort correctly ruled out for offside and Latics held on for a valuable three points on the road.

Man of the Match

Ben Amos produced a Man of the Match performance

Both Lang and Aasgaard did brilliantly to turn the game in Latics favour, but when they were under the cosh in the first half they could easily have been three or four goals behind, but for Amos’ superb goalkeeping.

The Latics keeper produced a Man of the Match performance with three top drawer saves to deny the Hatters.

The Latics manager started with three centre-backs and two wing-backs but it effectively became a back five in the first half as Luton used a high press to dominate.

Latics resorted to long balls up the field to Magennis which was invariably ineffective.

It was clear something had to change and on the hour mark Richardson moved to a back four and introduced Aasgaard, Broadhead and Shinnie.

It was a tactical masterstroke as the formation and the substitutions changed the course of the game.

As Luton became more tired Latics moved up a gear and Aasgaard’s fantastic finish was the icing on the cake.

Speaking afterwards Richardson was full of praise for his side’s excellent second-half performance and spoke about the importance of how the players are in the right mindset to come on and change the game – like Graeme Shinnie, Nathan Broadhead and Aasgaard.

“It’s a good day in the end, to have a three-game week as we’ve had with Burnley, West Brom and away at Luton, it’s a really high challenge.

In the main, the lads have stood up to the task. Today, we wanted to be more like us, and you have to match the fight, running and work ethic against Luton.

In the main, we did that out of possession but we weren’t good enough in possession in the first half. The lads knew that and in the second half, I thought we were excellent and deserved the momentum we put forward.

We certainly deserved the equaliser, and possibly should’ve got a penalty to get the winner (before Thelo popped up).

I’ve got to praise the squad in the main – the lads coming off the bench onto the pitch – to raise the bar as they do.

If you don’t go onto the pitch with the right mindset, you don’t get the wins as we did. Collectively, the lads are in a really good mindset, and in a really strong place and that’s their responsibility.

We need to make sure we are tactically aware, and to be fit, strong and healthy enough to regenerate and accept the challenges that are coming. Collectively, we are in a good pace and we need to keep making small steps forward.”

Richardson expressed that there is no better feeling than his side getting the winner in front of the 1,032 travelling supporters.

“To score in front of them as we did – and get the winner as we did – it doesn’t get any better!

We‘ll need them even more coming into the next few challenges, but a sold-out away end at Kenilworth Road and (Thelo) scoring the winner is very pleasing.”

Latics on the attack at Luton