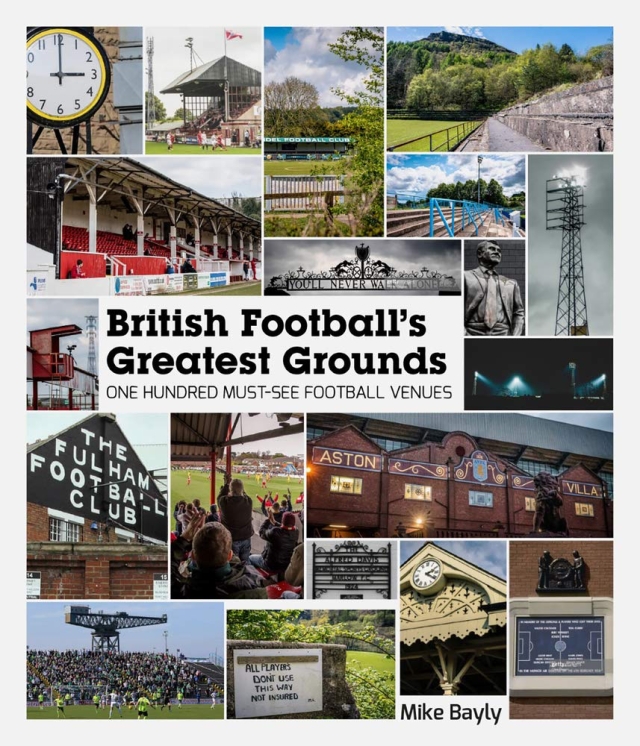 Mike Bayley has put together a splendidly eclectic collection of 100 British football grounds with a rich commentary and high-quality photographs. The book covers a breathtaking range of ground types from the humble homes of the non-league minnows to the mega-stadiums of the Premier League.

The list was compiled from a fan vote which was gathered from a blog of the project and publicised by the Football Association, the Football Supporters Federation, Groundtastic magazine, podcasts and programme editors as well as a TalkSPORT radio programme.

The list may draw criticism from fans of clubs whose grounds were not included but this is not a vanity project and the grounds have essentially been included because of their uniqueness.

For example, Chelsea’s Stamford Bridge hasn’t made the top 100 but Chorley’s Victory Park is included because it provides us with a glimpse of England’s football past.

These are grounds in remote settings with listed or distinctive structures, grounds with stunning backdrops or brilliant food. These are the remarkable stories of the best-loved grounds with colour photographs by acclaimed sports photographers.

Rather than just being a Stadium guide Bayly provides a potted history of each ground with personal observations and interviews. It may not be historically exhaustive but the author has uncovered some new information on the lesser-known grounds.

He also challenges some of the conventional wisdom, based on investigation by long-standing supporters and historians.

Bayly makes some excellent observations in his commentary. A recurring theme is that the popularity of grounds is often rooted in the past. Nostalgia is addictive and generational. Modernisation of our game means that older grounds will occupy a tender place in our hearts.

Fulham’s Craven Cottage is one of the best-known grounds which manages to encapsulate most of the characteristics of a special ground. History, architecture, location, atmosphere and individuality make Craven Cottage a football ground dear to the heart of Britain’s public.

This exceptional book emphasizes the sheer scale and diversity of football in the British Isles from the extremes of the Ewe Camp on the remote Isle of Arran to the Tottenham Hotspur Stadium in London. However, whatever the size and location of a ground, the connection between the fans and the ground is always an emotional one.

This captivating publication has clearly been a labour of love and it will be enthusiastically received by football fanatics everywhere. It is a delightfully evocative collection of football venues with some very well-known and others a complete revelation. It will surely provide a catalyst for many football fans to start a bucket list of grounds they will definitely want to visit in the near future.

This review first appeared in the February/March edition of Late Tackle magazine.