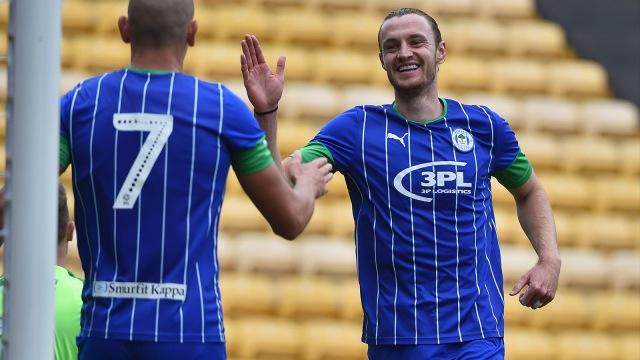 Will Keane converted his spot-kick

Wigan Athletic were held at home by Shrewsbury Town in a scrappy Boxing Day game at the DW Stadium.

The hosts should have been awarded a penalty just before half time when Tom Pearce was fouled by Clarke but early in the second half Pearce was again upended and this time referee Seb Stockbridge awarded the penalty and Will Keane converted the spot-kick.

But the Shrews drew level on 66 minutes when Whalley’s sharp turn in the box deceived Darnell  Johnson and the striker finished decisively.

Latics had chances to win the game in the latter stages when Keane fired wide of the target from a good position and substitute Thelo Aasgaard had his goal bound strike blocked.

Latics remain second bottom in the League One table but move to within three points of safety. Shrewsbury have now gone six games unbeaten and are in 17th place.

Leam Richardson made one change from the team which had drawn at Fleetwood with Matty Palmer replacing Kyle Joseph who dropped to the bench.

Shrewsbury made the early running and Clarke should have given them an early lead on eight minutes when he clipped the ball over the crossbar from a central position inside the box.

Latics were struggling to get going and were giving the ball away far too easily in the opening stages.

It was a poor spectacle as neither side got to grips with the poor conditions on a bobbly pitch.

Latics were denied a penalty on 42 minutes when Pearce was clattered from behind but the referee Stockbridge bizarrely ignored the challenge.

Just before the interval Jones came to Latics’ rescue making an excellent save low down to his right when Whalley looked odds on to score.

Scoreless at half time but early in the second half Latics were in front. Pearce was again upended this time by Ro-Shaun Williams, the penalty was awarded and Keane confidently converted the spot-kick.

The Shrews tried to respond quickly and Jones had to made another good save to deny Matt MIller on 50 minutes.

Soon afterwards Naismith tried his luck from distance but his effort was easily saved by Matija Sarkic.

The visitors were now pushing forward and when Latics stood off and allowed them to build down the right-hand side it was no surprise when they equalised. The ball was played into Whalley who made a sharp turn inside the box and finished expertly past Jones into the corner of the net.

Clarke went close again soon afterwards heading wide from inside the six-yard box and at the other end Naismith snatched at his shot from the edge of the area and the ball flew wide.

Joseph replaced Naismith on 76 minutes as Latics looked to gain the advantage.

On 86 minutes Keane drove into the box after good link-up play with Tom James but his final shot was disappointing and failed to trouble Sarkic.

In added time the hosts might have won it when Johnson battled down the right-hand side before pulling the ball back to Aasgaard but the young Norwegian’s goal bound strike was blocked by Aaron Pierre and Latics had to settle for a point.

It hadn’t been a classic encounter but Latics can take credit for their hard work against in-form Shrewsbury and with two crucial fixtures against bottom club Burton and third bottom Swindon forthcoming the hope is that they can soon climb out of the bottom four. 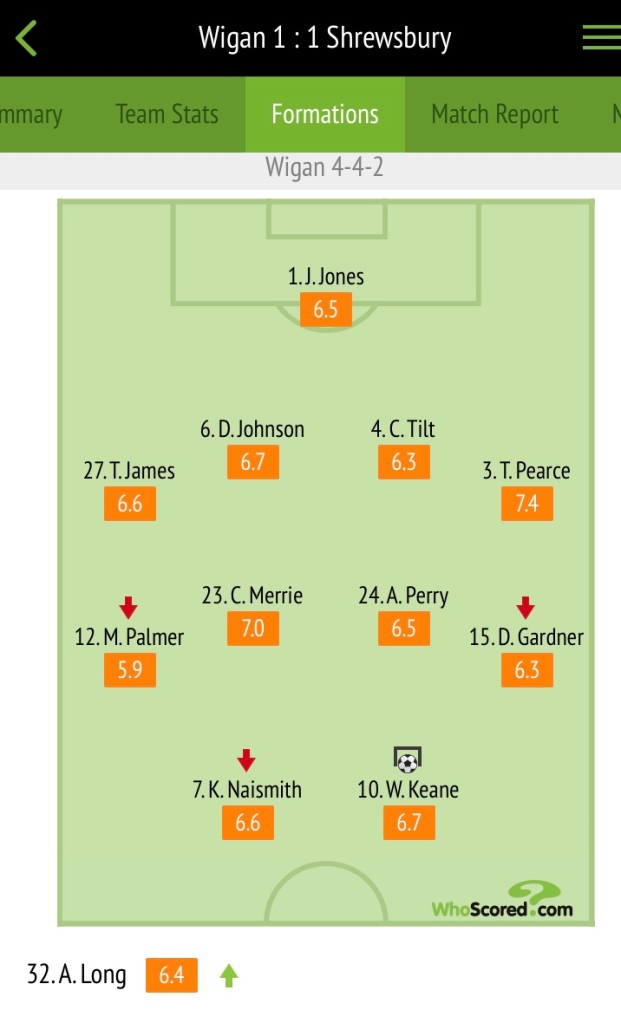