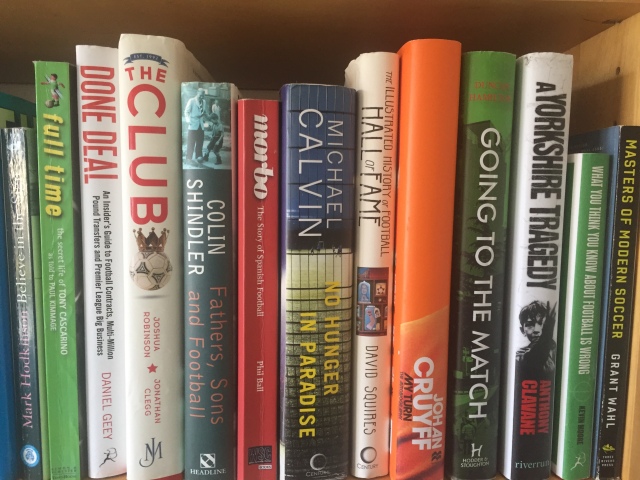 With most people stuck at home and looking for something to occupy their time. Now is a good time to catch up on the best football books of recent times. Here’s my recommended lockdown reading list.

Can we have our football back? How the Premier League is ruining Football and what you can do about it …by John Nicholson

In ‘Can We Have Our Football Back?’ Football365 writer John Nicholson produces a coruscating attack on the excesses of the Premier League and provides an optimistic blueprint for a football revolution.

Going to the Match – The Passion for Football by Duncan Hamilton

Duncan Hamilton’s latest book is inspired by L.S. Lowry’s famously evocative painting ‘Going to the Match’. The artist painted the supporters approaching Bolton Wanderers’ Burnden Park in 1953 and Hamilton uses the painting as his starting point.

It is an enjoyable read as Hamilton travels as a fan to games throughout the 2017/18 season taking in matches from all levels of the football hierarchy across England, Scotland and Europe.

It may be something of a grandiose title but in Masters of Modern Soccer American journalist Grant Wahl expertly gets to grips with how the global game is developing.

Wahl interviews some of the most interesting figures in the modern game and explains how those individuals have mastered their craft. His impressive line-up is Manuel Neuer, Vincent Kompany, Xabi Alonso, Christian Pulisic, Javier “Chicarito” Hernandez as well as managers Juan Carlos Osorio and Roberto Martinez and a director of football Michael Zorc.

Moving the Goalposts – A Yorkshire Tragedy by Anthony Clavane

Anthony Clavane’s remarkable insight into the demise of Yorkshire’s sporting institutions in the context of a post-industrial world is now available in paperback.

Clavane believes that ‘sport has gone wrong’ in the sense that it has been increasingly infected by greed, rampant individualism and amorality. Huge sections of society have been disenfranchised by a new sporting order in which money, rather than collective endeavour, determines success.

Daniel Gray’s ‘Saturday, 3pm. 50 Eternal Delights of Modern Football’ is a celebration of what makes football so special. Those golden moments that illuminates a football supporter’s life.

These short vignettes of prose-poetry capture the essence of what is still good in the game. What may seem mundane to non-football lovers such as: ‘Seeing a ground from the train’; ‘Getting the fixture list’; ‘Listening to the results in a car’; ‘The first day of the season’ and so on are all rightly identified as a significant part of the football experience.

Award-winning sports writer Michael Calvin’s latest football book is an ambitious, in-depth and wide-ranging examination of the current game. Calvin takes as his inspiration Arthur Hopcrafts’s ‘The Football Man,’ which was written two years after England won the World Cup and is regarded as one of the best football books ever written.

Hopcraft’s book was divided into nine sections but Calvin has gone for four broad headings: The Player; The Manager; The Club, The People.

The former director of the National Football Museum Kevin Moore has produced a challenging and revelatory new book which debunks many of the myths and assumptions about football.

In 50 short chapters Moore shatters many of the strongly held beliefs of football fans. His entertaining commentary is generally supported with hard facts and statistics although occasionally he does stray onto more subjective ground.