Latics are back on top – Rochdale 1 Wigan Athletic 4 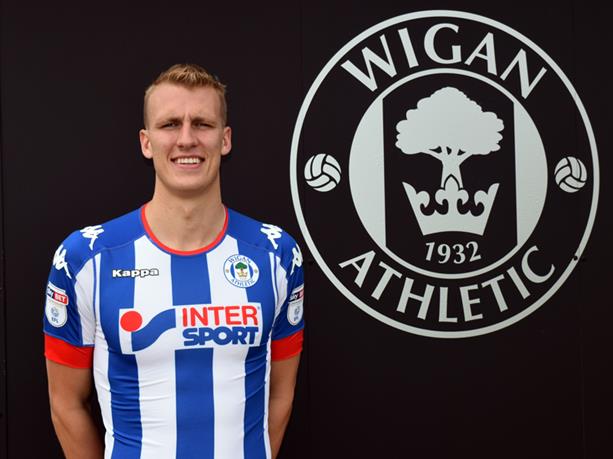 Wigan Athletic moved back to the top of the League One table with an impressive 4-1 hammering of relegation strugglers Rochdale.

In an end-to-end first half Latics went ahead in the 17th minute when Max Power’s corner was headed towards goal by Chey Dunkley and Dan Burn diverted the ball past keeper Josh Lillis.

Nick Powell went close for Latics hitting the post and Joe Rafferty headed against the crossbar for Dale.

But Latics were having the better of it and early in the second-half they increased their lead when Will Grigg played a delightful ball through to substitute James Vaughan and the striker finished with some aplomb.

Michael Jacobs produced a stunning finish from the edge of the area for Latics third on 60 minutes. Then Grigg sealed the result with a fourth on 63 minutes, after Lillis could only push the ball into his path from Gavin Massey’s goal bound low drive.

Dale managed a late consolation from the penalty spot when Dunkley brought down Calvin Andrew and Steven Davies converted the spot-kick.

Latics move to the top of the table with a superior goal difference to second placed Blackburn and with a game in hand on them. Third placed Shrewsbury are now five points behind Latics having played the same number of games.

Paul Cook retained the same starting eleven from the 5-1 drubbing of MK Dons at the weekend.

It was a brisk opening by both teams, on Rochdale’s newly relayed pitch, with chances aplenty.

Callum Camps volleyed wide for Dale before Latics took an early lead. Dunkley getting his head to Power’s corner and Burn diverting it home past Lillis.

Dale responded and Andrew, Matty Done, Rafferty and Camps all had opportunities to get them back in the game.

Latics also had chances before the break and Powell hit the base of the post and Nathan Byrne forced an acrobatic save from Lillis.

Powell had to be withdrawn just before the interval, with what appeared to be a re-occurrence of his hamstring strain, and was replaced by Vaughan.

Early in the second-half Vaughan linked up superbly with Grigg and the former Everton striker coolly finished past Lillis to increase Latics’ lead.

It was not long before Latics went further ahead as they quickly put Dale to the Sword with some breathtaking attacking play.

Jacobs produced a stunning finish from the edge of the area after first turning the Dale defence first one way and then the other.

Soon afterwards Latics were 4-0 up when Massey’s long-range drive was gratefully turned into the path of Grigg who delightfully received the gift and added his 24th goal of the season.

Latics perhaps understandably eased off in the final 15 minutes and Dale managed a consolation from the penalty spot, converted by Davies, after Dunkley had brought down Andrew.

It was another magnificent performance by Latics, who have now scored nine goals in their last two games and have an incredibly positive goal difference of 54. As the other results came in the travelling supporters not only celebrated the night’s performance but also Blackburn’s draw at Gillingham, which ensured Latics moved to the top of the table.