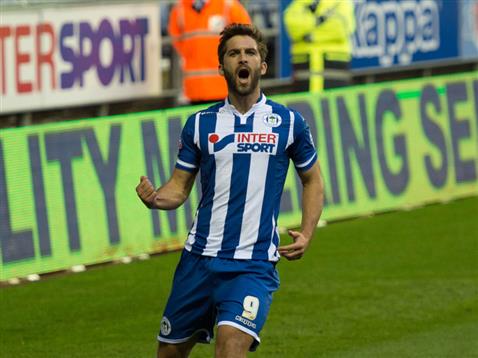 Will Grigg in fine form

Wigan Athletic moved back into the automatic promotion places with an emphatic 5-1 rout of MK Dons.

Will Grigg stepped his annual end of season goal rush with a superb hat-trick.

Grigg put Latics ahead after only eleven minutes from Michael Jacobs low cross and it was one-way traffic as they increased the advantage when Ethan Ebanks-Landell diverted Nick Powell’s cross into his own net on 24 minutes.

MK Dons pulled a goal back 10 minutes before half-time through Callum Brittain but Latics took complete control in the second-half with a rampant attacking display.

Powell produced a fine header at the far post on 57 minutes from Gavin Massey’s right-wing cross and then Grigg added a fourth on 74 minutes despite keeper Lee Nicholls tipping the ball onto the crossbar the ball spun back over the goal line.

Grigg completed his hat-trick on 76 minutes, taking his tally to 23 for the season, with an incisive finish through the legs of Nicholls.

Paul Cook made one change from the defeat at Portsmouth with Grigg replacing James Vaughan as the central striker.

Latics started brightly and they were ahead after only 11 minutes. A fine cross field pass from Powell found Jacobs in the area who brought the ball under control and centred for Grigg to finish from close range.

It was a difficult opening for MK Dons as they struggled to cope with Latics movement and creativity in the final third.

Former Latics reserve keeper Lee Nicholls had to make a good close-range save to deny an early Grigg header.

But Nicholls was beaten soon afterwards when another stunning Powell cross was headed into his own net by Ebanks-Landell with Grigg about to pounce.

Latics were finding it far too easy and a little sloppy period by the hosts allowed the Dons to get a foothold when Brittain fired home the edge of the area.

Elliott Ward headed over at the back post and Walton was also forced into a double save from Chuks Aneke as Latics lost their momentum.

But Latics quickly got back into their stride in the second-half.

The always dangerous Powell could have got on the scoresheet on 55 minutes when he forced Nicholls into another fine save tipping the ball onto the post and away to safety.

But Powell was not to be denied and he added Latics third two minutes later rising high at the back post to head home from Massey’s cross.

Soon afterwards Powell nearly repeated the act rising again at the back post but this time he headed wide of the target.

Latics were now totally in control and Grigg added his second and Latics fourth goal on 74 minutes. The prolific striker picked up a long ball from Dan Burn and chipped the advancing Nicholls, who somehow managed to knock it onto the crossbar but the ball bounced down over the goal line.

Grigg’s hat-trick and 23rd goal of the season came quickly after when Jacobs fed the striker inside the area and his incisive finish through the legs of Nicholls capped off a superb display.

Latics should have had a sixth late on when substitute Gary Roberts was presented with a golden opportunity from Callum Elder’s cross but he somehow managed to divert the ball away from goal.

A comprehensive victory by Latics which strengthens their position with seven games remaining.

Latics have a tricky fixture at Rochdale on Tuesday night, but if they can replicate yesterday’s performance they could move to the top of the table, if Blackburn fail to win at Gillingham.