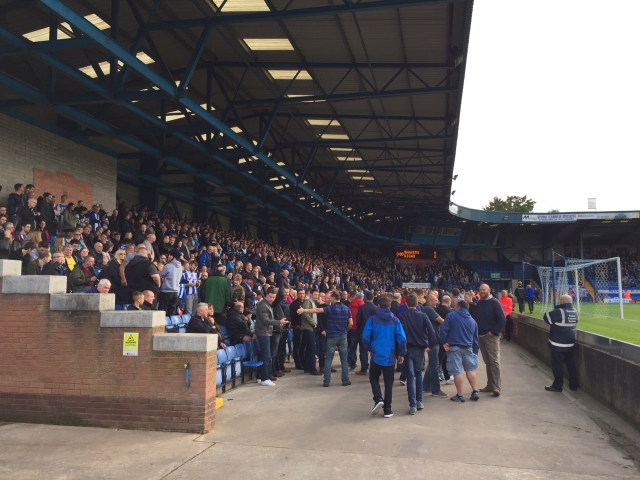 It looks like Latics’ push for promotion from League One is going to be done the hard way. Despite dominating the game against Bury they gifted their opponents a two goal lead, before producing another dramatic comeback to secure a point at Gigg Lane.

The unmarked Nathan Cameron gave the Shakers the lead from a corner before the Bury substitute Tom Pope headed in Reece Brown’s cross.

Bury had Chris Hussey sent off for a second bookable offence, before a Cameron own goal brought Wigan back into the game.

Latics deservedly drew level on 90 minutes when Craig Morgan curled in a peach of an equaliser from the edge of the area.

Latics might have gone on to win the game after incessant pressure but Bury hung on for a share of the points.

Wigan manager Gary Caldwell recalled the rested Michael Jacobs, David Perkins, Reece James and Craig Morgan to the starting line-up from Tuesday’s Johnstone’s Paint Trophy win at Crewe. Yanic Wildschut coming in for Will Grigg was the only change from the team against Walsall with the Northern Ireland striker on international duty.

Latics started positively with Wildschut producing a run and cross down from the left, but Jordy Hiwula was unable to convert the cross into a chance.

But then Latics went behind after only six minutes. Hussey swung in a corner and Cameron rose unchallenged at the back post to head the Shakers in front.

Latics responded with a low shot from Perkins from just inside the area, but the ball went wide of the target. Then Wildschut tried from distance but he also fired wide of the Bury goal.

The Wigan defence were once again all at sea from another corner, but fortunately Chris McCann cleared Peter Clarke’s header off the line.

The visitors continued to press however, with Wildschut, Hiwula and Perkins having shots which all deflected for corners.

Wildschut was looking Latics’ liveliest player and the Dutchman produced a trademark run towards the Bury goal before unleashing a 25 yard blast, Bury keeper Lainton was unable to hold the shot but the danger was eventually cleared.

Hussey was then booked for a professional foul on Jacobs as he broke clear. Latics then had shots from Jacobs and Perkins but both were blocked on the edge of the area.

Latics went into interval feeling aggrieved that they had dominated possession and created more chances than their opponents, but once again their poor defending had let them down.

Wigan began the second half on the offensive with Daniels having a deflected shot saved by Lainton, but they soon fell further behind to another sucker punch.

Bury broke quickly after another Wigan attack and substitute Tom Pope was allowed to get in front of Barnett, stoop low and head the ball past Jaaskelainen for an unlikely 2-0 lead.

Wigan were in shock and manager Gary Caldwell decided to try to change the course of the game by moving to a back four, replacing Reece James, and introducing Grant Holt in attack.

Latics upped the pressure and continued their dominance but Bury were difficult to breakdown. But on 77 minutes the home team were reduced to ten men when Hussey brought down Jacobs for a second bookable offence and was dismissed.

Caldwell surprisingly brought on Francisco Junior for the tiring Hiwula, when another forward might have been expected, but the change had a positive effect.

With the Bury defenders tiring, Junior linked up play well and created opportunities for his teammates.

Wildschut continued to threaten and when his cross found Jacobs it looked as though Latics would have a goal back, but the former Wolves winger lifted his effort way over the crossbar.

However, Wigan did pull one back on 84 minutes when Jacob’s cross from the right found Holt at the near post and the ball seemed to go into the net off Cameron.

Latics surged forward in search of the equaliser, but Bury somehow continued to survive the onslaught.

That is until the 90th minute when Wigan’s captain Craig Morgan produced a peach of a goal to send the travelling army of 1,677 fans into raptures.

Morgan picked the ball up on the edge of the box and curled a superb strike into the bottom left hand corner of the Bury net.

There was only one likely winner now as Latics continued their siege of the Bury goal. Power curled a free-kick just over the crossbar with Lainton beaten, and then substitute Tim Chow looked to have scored the winner, but only TV replays will be able to show if the ball crossed the line.

Despite five minutes of added time Bury somehow survived. Latics had produced yet another amazing comeback, but they will also be rueing the defensive frailties which had nearly cost them the match.

It is never boring watching Latics away from home this season, they are regularly giving their opponents a two goal start before they manage to get their own game going.

Gary Caldwell will be pleased with Latics domination of the game with 54% possession and 18 shots to Bury’s 6, but he will also be very unhappy with the numerous defensive mistakes that have blighted the season so far.