Posted on October 9, 2015 by ianhaspinall 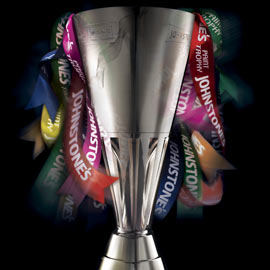 Latics overcame Crewe on Tuesday night and progressed to the Northern Area quarter-final of the Johnstone’s Paint Trophy, making the dream of a third Football League Trophy success a real possibility.

Wigan have previously won the trophy when it was the Freight Rover Trophy in 1985 and the Auto Windscreen Shield in 1999 and they will be hoping they can win it again this time around.

If Latics are to reach Wembley they will have four games to navigate: the quarter-final, semi-final, and a two-legged Northern Area Final, before they would face the Southern Area winners.

Bristol City might provide a good omen for Latics. They won last season’s trophy and went on to win promotion from League One. They are also the only club to win the Football League Trophy three times.

I’m sure Latics would love to emulate them and win the trophy for a third time. They will also be conscious that a good cup run could have a similarly positive effect on their own league form.

Putting together a winning run in the JPT will certainly ensure a positive vibe around the club and can only boost the players confidence.

The competition rules of the JPT stipulate that the manager can only make a maximum of five changes from the last league line up, which means that many fringe players will get valuable game time, if the cup run is extended.

As more players are involved in the JPT, the whole squad will have a greater chance to impress and this can only be beneficial to Gary Caldwell’s plans.

The manager will have an opportunity to evaluate his players’ form in a competitive environment and decide whether they are ready to play in the league team.

More competition for places can only boost performances. The further Latics go in the competition and the desire and determination to play at Wembley will become more real.

The draw for the Northern Area quarter-final takes place tomorrow morning on Sky TV. There are plenty of strong teams left in the competition, but as Latics have shown in the recent past, they are capable of beating anyone on the day.

Latics are, of course, no strangers to Wembley having played there on four occasions since April 2013, and another visit would be a fantastic achievement for Gary Caldwell’s emerging team.

This article was first published in the 12th Man column for the Wigan Evening Post on Friday 9th October 2015.