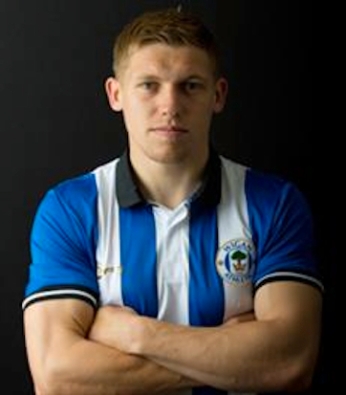 Martyn Waghorn came to Wigan’s rescue with a spectacular overhead kick in the 94th minute to deny Bolton an unlikely victory at the DW Stadium.

Latics had dominated proceedings but were unable to capitalise on their dominance and when Tom Walker’s deflected shot beat Ali Al Habsi, it appeared the points were going to the Trotters.

Relegation rivals Rotherham United were leading against Sheffield Wednesday when the final whistle blew at the DW Stadium. But in added time at the New York Stadium the Owls produced a miraculous turnaround to win 3-2 and the gap between the Millers and Latics is now only five points with seven games remaining.

Wigan made one change from the side which lost at home to Watford, with loan signing Josh Murphy replacing Sheyi Ojo.

After a cagey opening from both sides, Latics gradually took control of the game.

In the 15th minute James Perch nearly put the home team ahead when his curling shot from the edge of the area beat Wanderers keeper Ben Amos, but the ball crashed against the crossbar and away to safety.

Centre back Harry Maguire then drove forward and fired his volley just over the Wanderers crossbar.

Wigan continued to dominate and they should have been ahead on 37 minutes. Marc-Antoine Fortune headed Murphy’s cross straight at Ben Amos from close range, when a header either side of the keeper would have almost certainly resulted in a goal.

Just before the interval Latics did have the ball in the net but unfortunately Leon Clarke’s finish was ruled offside.

Early in the second half Wigan continued to dominate possession and create opportunities.

Jermaine Pennant tried a quick free kick which nearly evaded Amos at the near post, but the keeper was able to turn the ball away to safety.

Winger Josh Murphy continued to pose a threat to the Trotters and he nearly got on the score sheet in the 66th minute when his curling effort from the edge of the area looked to have beaten Amos but dropped onto the roof of the net.

But the DW Stadium was stunned in the 70th minute when Tom Walker’s effort from distance took a deflection and wrong footed Ali Al-Habsi and the ball rolled in the bottom left hand corner.

It was looking like all their dominance would come to nothing, and with other results going against them Latics were on the verge of relegation.

With around 15 minutes remaining, Murphy again went close when his shot from range curled just wide of Amos’ goal.

Wigan continued to press forward in an increasingly desperate search for the equaliser. When Leon Clarke crashed his header against the crossbar in the 90th minute it looked as though Latics luck was out.

The Wigan players and fans were mightily relieved not to lose to their local rivals and with news of Sheffield Wednesday’s fight back against Rotherham filtering through it was a fantastic finale to the day.