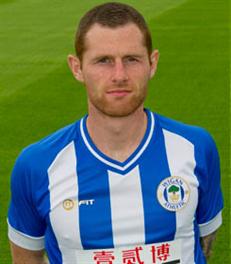 Chris McCann on target for Latics

The free scoring striker produced a top quality finish to give the Hornets the lead but Chris McCann headed in an equaliser just before half time.

Latics had been the better team in the second half but with only eight minutes remaining Deeney headed home the decisive goal.

Most people had anticipated changes to the forward line after recent poor results but the manager sprung a surprise by moving James McClean into the central striker’s position role with Espinoza operating on the left side and McManaman on the right.

Latics started hesitantly against the Hornets who had defeated Fulham 5-0 at Craven Cottage the previous week.

Scott Carson made a couple of good saves from Gianni Munari’s shot and a 30-yard free-kick from Daniel Tozser. Watford took the lead on 20 minutes following good work by winger Ikechi Anya, who crossed for Deeney to produce a quality low finish from a tight angle.

Wigan responded well and gradually got a foothold in the game, pushing Watford back with some concerted pressure.

Soon afterwards Latics had two good chances to draw level. Chris McCann’s shot was blocked before the ball fell to McClean who beat his marker but his drive was saved low down by Gomes.

Latics were level just before the interval. McClean’s whipped corner found McCann unmarked on the penalty spot and the Irishman’s header flew past Gomes and high into the Watford net. It was a deserved equaliser and augured well for the second half.

Latics continued the good work after the interval with Watson nearly re-creating his famous FA Cup winning goal but this time he headed just over the crossbar from McClean’s corner.

McClean forced Gomes into another good save low down as Wigan continued to have the better of the play.

Latics were showing more signs of cohesion than in the last two games and it was looking likely that they could hang on for at least a point, but with eight minutes remaining all the good work amounted to nothing as Deeney grabbed the winner.

Anya was allowed far too much space on the right hand side and the little winger crossed for Deeney to power home his second of the game and his fifth goal in the last two matches.

It was hard on Wigan, but in the final analysis the difference had been in the quality of the strikers. Latics are struggling to find any marksmen and Watford have quality in abundance with Deeney, backed up by Matej Vydra, Almen Abdi, and Daniel Tozser.

Latics remain the second bottom in the Championship table and are now four points from safety.

Malky said the defeat was hard to take but was still upbeat in his analysis and believes results can be turned around. He said:

“We’ve played three of the top four clubs in the division in the last few weeks and we’ve been in the games absolutely so that’s what I hold on to in terms of this group of players we’ve got here.

It’s just about the fine details and the demands that the players are putting among themselves; they’ve got to keep demanding of themselves so that one little error isn’t costing them the game which it is what’s happened over the last couple weeks.

It’s a bit about belief as well, we’ve got to keep believing in ourselves because this is a good group and they’re together”.