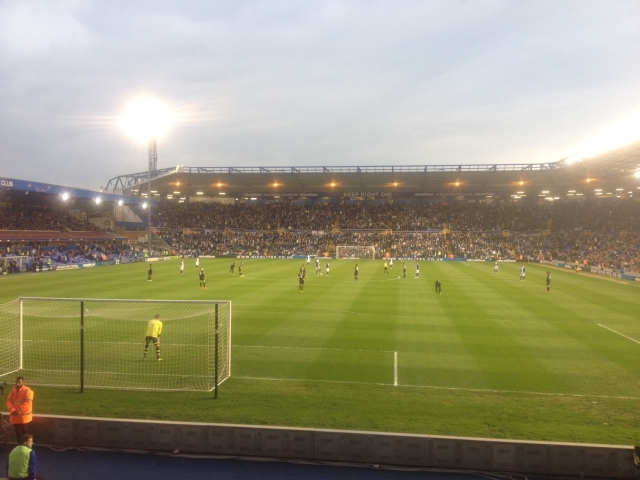 View from the away end at St Andrew’s

Latics cemented their place in the top six in their 59th game of the season. Few people could have expected them to make the play-offs when Uwe Rösler took over as manager from Owen Coyle in early December.

They were struggling in 14th position and the prospect of a relegation scrap was a distinct possibility.

But Rösler has galvanised the squad, while making some astute loan signings and his determination to succeed has propelled the team into the end of the season mini knock-out.

Last night’s victory was certainly hard-fought against a team who are desperately trying to avoid the drop.

Birmingham have had a catastrophic slide down the league tables.

Only three years after winning the league cup, they are now looking at the reality of relegation to the third tier of English football following an 18th successive home game without a win stretching back to October.

Lee Clark’s side remain third from bottom, and will drop into League One if they lose at Bolton on Saturday.

Even a victory will not be enough to secure survival if other results go against them.

Latics made a great start at St Andrew’s and scored after only three minutes. Jordi Gomez strode through the home defence and played the ball to McManaman, who showed great composure by curling his low right-footed shot past keeper Darren Randolph and into the corner of the net.

They might have increased their lead when a scramble in the home penalty area involving James Perch and Martyn Waghorn ended with the ball in the net, but the referee ruled out the goal for what looked like a a very minor infringement on the Birmingham keeper.

Lee Clark’s side might have drawn level after 29 minutes, but Scott Carson produced a superb save to deny Manchester City loanee Emyr Huws.

But Wigan had always looked the better team in the first half with McManaman and Shaun Maloney causing problems for the Birmingham rearguard.

Clark sent on 6ft 8in striker Nikola Zigic at half-time to try to unsettle the Latics defence.

His best opportunity came in the 69th minute but his weak header from six yards was comfortably dealt with by Carson.

Waghorn fired into the side netting for Latics but as the half progressed they visibly tired and the home team pushed desperately for an equaliser.

Birmingham’s aerial bombardment was unsettling the Wigan defence and in a frantic finale, Carson was called upon to dive at the feet of Federico Macheda, before saving a goal bound shot from Hayden Mullins.

There was much relief amongst the Wigan players and the 1,000 travelling fans at the final whistle. The margins between success and failure at this level are often very slight.

What seemed like an unrealistic play-off spot in December has now become a reality and the chance of a quick return to the top flight is now within sight.