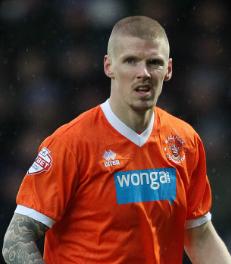 Andy Keogh on target for the Tangerines

Latics promotion push suffered a surprise setback when they went down 2-0 to relegation strugglers Blackpool at the DW Stadium.

Martyn Waghorn’s first half penalty was well saved by the Tangerines keeper Matt Gilks after Tony McMahon had brought down Shaun Maloney.

Wigan failed to capitalise on their first half dominance and were shocked to go behind from Andy Keogh’s header on 60 minutes from Isaiah Osbourne’s cross.

The result was sealed on 70 minutes when Keogh played in Stephen Dobbie whose low shot beat Ali Al Habsi.

The Tangerines who were cheered on by 4,000 fans, most of whom had been paid for by Blackpool chairman Karl Oyston at a cost of £60,000, subsequently moved out of the bottom three.

Latics now go to strugglers Birmingham City knowing that three points will be crucial if they want to avoid having to beat Blackburn Rovers on the final day of the season at Ewood Park.

Following the recent defeat to Burnley Uwe Rösler reverted to the forward line that had so convincingly beaten Reading 3-0.

Latics looked lively in the opening stages with Shaun Maloney, Martyn Waghorn and Callum McManaman creating problems for the Tangerines back line.

James Perch had his header saved by Gilks before Jordi Gomez drove wide of the target from a good position.

On 20 minutes Wigan were awarded a penalty when Maloney was fouled by McMahon. The normal penalty taker Gomez was surprisingly replaced by Waghorn but the former Leicester City striker’s penalty was superbly saved by Gilks.

Waghorn had a great chance to make up for his penalty miss on 30 minutes but he failed to connect with Espinoza’s cross with the goal at his mercy from six yards out.

Blackpool had failed to test Ali Al-Habsi in the first-half and it was looking like it was only a matter of time before Latics would make their dominance count.

Nick Powell replaced Waghorn at half time and the Manchester United loanee had a glorious chance to give Wigan the lead from close range following a free kick by Gomez but he missed the target.

But Latics were rocked on the hour mark when Keogh headed home from Osbourne’s cross.

Wigan’s day got even worse ten minutes later when the Tangerines doubled their lead. Keogh cut the ball back and Dobbie steered his shot past Al Habsi.

Latics tried to respond and both Perch and Gomez had shots blocked before Powell blazed the rebound high over the cross-bar.

Blackpool had not won away from home since the 2nd November but this unexpected victory will certainly give them hope that they can survive with one match remaining.

Wigan will be desperately disappointed not to have secured their play-off place on the day, but they will also be conscious that another win in their last two games will give them a play-off spot and that promotion is still very much within their reach.