Posted on January 5, 2014 by ianhaspinall 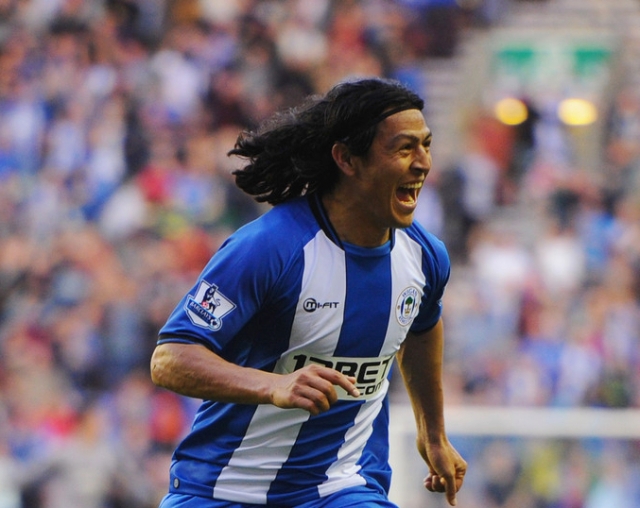 Roger Espinoza on target for the Latics

The FA Cup holders were held to a draw in an entertaining six goal thriller with League One MK Dons. Wigan started the game with five of the players who won the trophy in May and took an early two goal lead with strikes by Roger Espinoza and Jordi Gomez.

But MK Dons hit back just before half time with two goals by Ben Reeves to stun the home crowd.

Just after the interval, Shaun Williams had a great opportunity to cause an upset but Ali Al Habsi guessed correctly and dived to save his penalty.

Callum McManaman looked to have secured Wigan’s progress on 65 minutes with a well taken goal but in the dying minutes Patrick Bamford equalised as the Latics defence failed to clear a corner.

Wigan must now overcome the Dons at Stadium MK if they are to progress to a fourth round tie at home to Crystal Palace.

Uwe Rosler made four changes from the team that won 1-0 at Derby County, with Grant Holt, James McClean, McManaman and Gomez coming into the starting eleven.

Wigan made a great start with Roger Espinoza scoring his first goal of the season with a spectacular 30 yard strike on 18 minutes.

It was not long before the Latics were two ahead as Gomez rifled a low shot past David Martin in the Dons goal.

Wigan looked to be cruising into the fourth round, but the Dons continued to play their passing game despite the two goal deficit and were rewarded just before half time when Reeves struck twice to draw level.

Just on the 45 minute mark Reeves showed good technique as he placed his shot past Al Habsi and two minutes later the midfielder turned attacker scored again as the Wigan defenders backed off.

Matters could have got worse for Wigan just after the break when James McClean fouled substitute George Baldock inside the box, but Al Habsi produced an excellent stop to deny Williams’ penalty kick.

The home team were ahead seconds later as Espinoza fed McManaman who broke the offside trap before firing past Martin.

But the Dons did not give up and equalised with five minutes remaining when Latics failed to clear a corner and Bamford finished from close range.

Rosler’s men will have to show much more resolve in the replay if they are to progress to the fourth round. Wigan should have closed off the game when they were in control at 2-0, but credit should be given to the League One team for persisting with their passing game and showing the determination to fight back on two occasions.