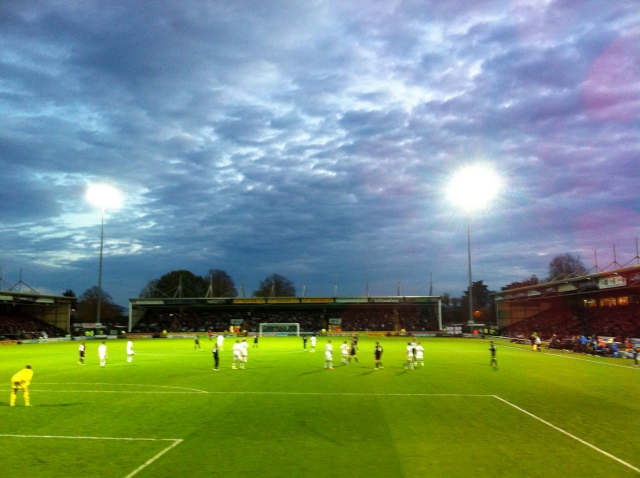 Wigan’s first away win in nine league and cup games gave them an important three points at Huish Park.

Marc-Antoine Fortune’s first goal of the season moved the Latics to within two points of the play-off zone with a game in hand, while Yeovil remain two points adrift at the bottom of the table.

The striker scored at the back post after being set up by substitute Grant Holt from close range on 78 minutes, having seen two earlier efforts cleared off the line.

Yeovil manager Gary Johnson made three changes to the line up that started the last game at Leeds. Ed Upson was suspended and both Sam Hoskins and Liam Davis dropped to the bench. Replacing them were Paddy Madden, Sam Foley and Luke Ayling. Fraser Fyvie was unavailable to face his parent club.

Wigan started hesitantly and it was the Glovers who looked most likely to score in the opening exchanges.

Lee Nicholls was forced into a good save on 21 minutes, tipping Joe Edwards’ 20-yard strike over the bar. Soon afterwards Madden wasted a good opportunity when he blasted high and wide after being put through on goal.

For long periods of the game the Championship newcomers looked capable of causing an upset. But despite a brave battling performance the Glovers were unable to celebrate a goal with their famous goal music ‘Glad All Over’ by the Dave Clark Five.

They are now the lowest scorers in the Football League with just nine goals and their inability to take their chances is likely to be their downfall.

Latics had struggled to put together a consistent passage of play until just before half time when Nick Powell saw a close-range shot cleared off the line and Callum McManaman and Fortune both had shots blocked.

Loanee winger Marc Albrighton then produced a stunning drive from 25 yards and despite beating keeper Wayne Hennessey the ball hit the crossbar, much to the relief of the home fans.

Wigan were much better in the second period with Albrighton proving a constant threat down the right hand side. 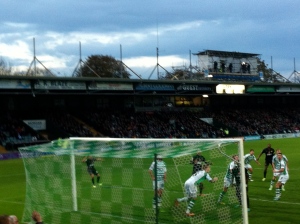 Wigan on the attack

The Yeovil goal was leading a charmed life as Fortune again went close and a Ryan Shotton header was desperately cleared away.

Substitute Striker Holt made an instant impact on 78 minutes when his run and cross set up Fortune who finished from close range at the back post. The Yeovil players appealed for hand ball against Holt and TV replays suggest that they may have a case.

Powell could have made the result more emphatic in the dying seconds but he made a poor pass to substitute James McArthur and the opportunity was wasted.

Wigan’s performances have been far from convincing, but they continue to pick up the points which keeps them in contention for the play offs.

Coyle’s squad rotation system can prove problematic and like today many of the first half performances have been indifferent, but the victory has ended Wigan’s away day hoodoo and it is the first time they have won back-to-back Championship matches all season.