Posted on November 7, 2013 by ianhaspinall 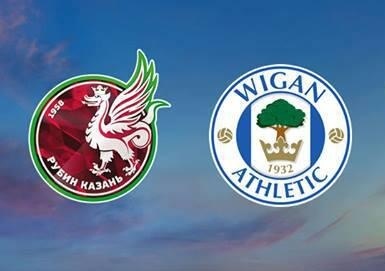 Wigan Athletic experienced their first Europa Cup defeat when they were edged out 1-0 by Group D leaders Rubin Kazan.

A defensive lapse allowed Rubin full back Oleg Kuzmin to score in the 20th minute but Wigan might have levelled when Thomas Rogne hit the crossbar and James McClean flicked a corner narrowly wide.

The result leaves Wigan still in second place in the group with games against Zulte Waregem (H) and NK Marbor (A) still to come.

Manager Owen Coyle made six changes to the starting eleven from Saturday with James Perch playing an unusual role just in front of the back four. The Latics were without Jean Beausejour due to a foot injury, Ben Watson failed a fitness test and Scott Carson has an ankle problem, so Lee Nicholls was making his European debut in the goal.

James McArthur took over as Captain with Grant Holt starting upfront and McClean and Callum McManaman as the wide men.

Rubin had not lost a European home game in Kazan in 22 matches since going down 1-0 to Parma FC in the first round of the 2006/07 UEFA Cup. But they were still without top striker José Rondón who has been out since late September, after breaking a bone in his foot.

The game started in untidy fashion with neither side able to settle on the ball, but Wigan had the first opportunity on 11 minutes when McClean’s cross was well saved by Rubin keeper Ryzhikov with Holt ready to pounce at the back post.

The home team should have gone ahead on 14 minutes. Wigan gave the ball away on the edge of their own area and the ball was pulled back into the path of three Rubin attackers but none could make the vital contact.

Rubin did take the lead on 20 minutes when full back Oleg Kuzmin was allowed plenty of freedom by McClean and Stephen Crainey to run onto a hopeful pass and comfortably finish low to Nicholls right.

Latics were struggling to get a foothold in the game and Rubin were dominating possession for long periods. But Holt had an opportunity on 26 minutes when a long ball by Roger Espinoza found the former Norwich man in a good position but he headed over the crossbar.

The Russians slicker passing and better movement was noticeable and they looked likely to add to their lead. Wigan in contrast relied on the long ball and rarely threatened the Rubin goal.

Despite the poor first half showing Coyle did not make any changes at half time.

Wigan’s main goal threat now seemed to come from Ryan Shotton’s long throw. The defender currently on loan from Stoke City is not quite in the Rory Delap class, but his aerial bombs were proving a problem for the Rubin defence.

The Rubin keeper was lucky to get away with a free kick when Shotton’s long throw into the box deceived him and Leon Barnett sent the ball against the bar, but the flag was up from the referee’s assistant.

Nick Powell replaced Perch on the hour mark and he almost scored the equaliser when his long-range effort grazed the post.

Soon afterwards Marc-Antoine Fortune, on for the ineffective Holt, fired into the side netting from a decent position.

The home team were now sitting back and hoping the 1-0 scoreline would be enough. Wigan could have taken a vital point when Espinoza’s cross found Rogne, but his header came off the bar before McClean’s late flick from Crainey’s corner went agonizingly close.

Despite lacking some of the style and quality of their Russian opponents Latics probably deserved to take a point. Rubin Kazan now qualify for the Round of 32 and Wigan will need to take at least three points from their remaining two group games if they are to join them.