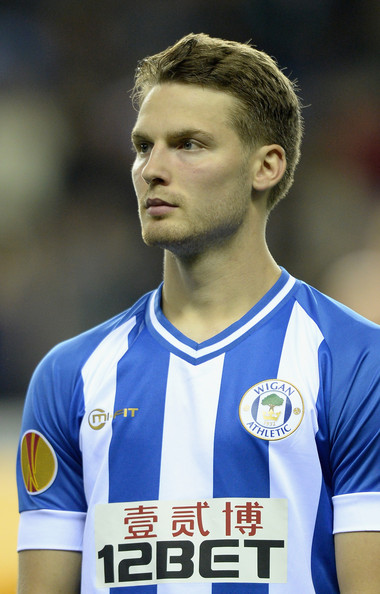 Substitute Marc-Antoine Fortune had two late chances to seal the three points but was twice denied by the Rubin keeper Sergei Ryzhikov.

It was a risky strategy by Coyle which nearly didn’t pay off as the team looked disjointed and lacking a cutting edge in the opening half. In fact it was the visitors who scored with their first real attack on 15 minutes. Chris Mavinga’s inviting ball caught the Wigan defence cold and the former Spartak Moscow forward Prudnikov clinically finished past Scott Carson.

It should have been a wake up call to Latics, but they continued to struggle to find any continuity and rarely threatened the Rubin goal until Nick Powell struck five minutes before the interval. The 19-year-old scored his third goal in the Europa Cup when he fired a superb effort into the bottom corner of the Rubin net. It was a turning point in the game, as Wigan now had a foothold which they had barely deserved.

They were much improved in the second period, although chances were at a premium for both sides. Marc-Antoine Fortune replaced Grant Holt and Callum McManaman took over from Jordi Gomez as the home side pressed.

Substitute Fortune had two excellent opportunities to take all three points but after evading several Rubin defenders and creating a space for himself he shot tamely at Ryzhikov and in the dying minutes the goalkeeper produced an incredible reflex save to deny the striker.

Owen Coyle will be relieved that his team had come through their toughest Europa League test so far. Rubin Kazan are favourites to win the group and Wigan will be pleased to have taken a point from a side which reached the quarter-finals last season.

Wigan are now handily positioned in second place with three matches remaining, Rubin (A) Zulte-Waregem (H) and Maribor (A). Three points from these remaining fixtures could prove sufficient for the team to progress to the round of 32.