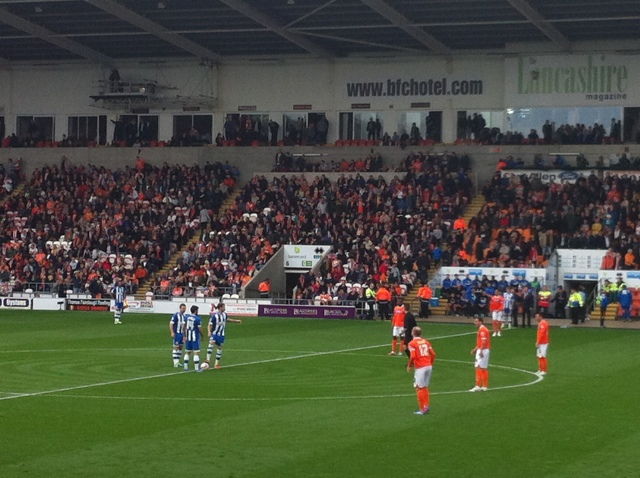 Kick Off at Bloomfield Road

A first half penalty converted by Tom Ince was the difference between the two sides at Bloomfield Road. Scott Carson conceded the penalty after he brought down Dan Gosling following a speculative through ball that had evaded the Wigan defence.

Latics day got worse in the dying minutes as James McClean was dismissed for retaliation after being stamped on by Gary Mackenzie.

Wigan had chances to equalise and hit the bar on two occasions but Blackpool could have increased the lead in the latter stages as Wigan desperately pushed forward.

Owen Coyle once again changed his starting line up with Emmerson Boyce and Callum McManaman coming in for Jean Beausejour and Ryan Shotton. Surprisingly he left fit again strikers Grant Holt and Marc Antoine Fortune on the bench with Nick Powell starting as the lone striker.

Blackpool manager Paul Ince was banned from the stadium for five games after threatening to knock out an official after their game at Bournemouth in September.

Despite the manager’s absence and not having won for five games Blackpool were combative and organised from the off and Wigan started tentatively.

Clear cut chances were rare in the first half but Wigan’s Powell headed wide from close range following a free kick and Tom Ince volleyed high and wide from a good position before the Tangerines took the lead in the 24th minute.

A speculative pass from Neal Bishop set Dan Gosling free inside the box and the on-loan midfielder was tripped by Carson. The Blackpool manager’s son stepped up to blast the penalty past the Wigan keeper.

Despite some good work by James McArthur, who was Wigan’s most industrious player, too many of the Latics starting line up were below par.

Early in the second half an increasingly desperate looking Owen Coyle introduced subs Holt, Fortune and Beausejour but the 4-2-4 system simply encouraged Wigan to bypass midfield and relied on speculative crosses and long-range efforts from McClean.

Wigan’s change in formation however did make the game open up with chances at both ends. McClean headed wide at the back post from Boyce’s cross, before Rogne’s thumping header hit the crossbar and Boyce failed to capitalise on the rebound.

Grant Holt then produced a superb diving header which hit the crossbar and Leon Barnett’s snapshot was stopped by Matt Gilks’s legs.

At the other end, Carson incredibly kept out two shots from Ince, one from Steve Davies, and a point-blank Kirk Broadfoot header in an exciting final five minutes.

In injury time McClean was bizarrely dismissed for what appeared to be complaining about being stamped on.  The Wigan winger was outraged that he had been first elbowed by Mackenzie and then stamped on as he lay on the ground. Referee Mark Haywood consulted his Assistant who indicated that McClean had somehow been at fault and the Irishman was sent off.

It was a frustrating day all around for Wigan, who have now not scored in their last six away games.

The result puts the team well off the pace in the push for the automatic promotion places – 13 points behind QPR and 15 behind Burnley. It would now take a monumental improvement in form to break into the top two positions.

Everybody expected a rebuilding period following the departure of Roberto Martinez but many fans are now becoming frustrated with the performances and the manager’s constantly changing team selections.

The poor run of injuries and the absence of star man Shaun Maloney have not helped matters, but the manager must take responsibility for the results and a major improvement is now required if Wigan are to make the play offs.