Who do you want to go down? 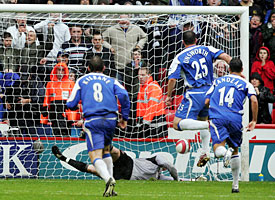 As we enter the last four games of the Premier League season everyone is trying to predict the future results and what the final league table might look like. I have to say that having had a go for myself (Wigan stay up in 16th place), it is very difficult to predict the final outcome.

There will always be unexpected results in the run in – Wigan’s survival on the final day at Bramall Lane in 2007 is a case in point. Managers, players, referees and linesmen will inevitably make mistakes when under pressure and luck will no doubt play its part.

The abilities of the teams near the bottom are quite evenly matched and it may be that ultimately goal difference decides who goes down.

So it is practically impossible to predict the final outcome. It is much easier to say who I would like to see relegated.

The most obvious candidate from my point of view is West Ham United. The injustice experienced by Sheffield United because West Ham did not get a points deduction for fielding ineligible players Tevez and Mascherano still sticks in the craw. Following various court cases West Ham agreed to pay compensation to Sheffield United of between £15 and £25 million but by then Sheffield had lost their Premier League status and as I write this they are now on the verge of relegation to Division 1.

Although West Ham may have a strong football tradition, their recent history has been characterised by financial mismanagement and some rather shady dealings, for example with the Icelandic owner Eggert Magnusson and the football agent Kia Joorabchian.

The current owners Sullivan and Gold made their money in the sex industry having moved from Birmingham City in 2010. During their time at Birmingham Sullivan and Birmingham managing director Karren Brady were released on bail after being arrested and questioned on suspicion of conspiracy to defraud and false accounting in connection with an ongoing investigation of alleged corruption in English football, although the charges were subsequently dropped.

So who else do I want to go down?

Well Wolves have to be high on the list, purely because the BBC Match of the Day pundits Lawrenson, Lineker and Shearer etc seem to be in love with their manager Mick McCarthy. According to these sycophants McCarthy can do no wrong and therefore Wolves deserve to stay up. How do you explain this? The cynical amongst us would say that it is because they are his mates and impartial analysis is not to be expected from Match of the Day pundits.

Wolves haven’t been impressive this season and they currently sit second bottom. Wigan have outplayed them twice this season and the match at Molineux was particularly one-sided. McCarthy likes the direct approach which can on occasions can produce results, but against us it was clear that Wigan’s passing game was superior and surely this has to be how the game should be played both now and in the future.

The final team in my ‘Want to go down’ list is Birmingham City. The Blues may have won the League Cup this season, but their dour style does not make them an attractive team to watch. Only Fulham have drawn more matches this season. Alex McLeish’s team are hard to beat because of their hard physical approach to the game, but with players like Lee Bowyer, who has an awful disciplinary record, they will win never win many friends. 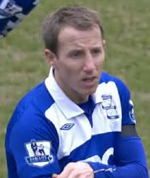 It is not easy to like a team whose bluenose supporters have a reputation for bad behaviour. During the game at the DW stadium earlier in the season the Wigan goalkeeper Ali Al Habsi was showered with missiles from behind the goal and after the game some Birmingham supporters threw bricks and coins at Wigan supporters as they crossed the canal bridge. Most clubs seem to have a bad element amongst their support, but Birmingham seem to have more than most. These idiots don’t deserve to have a club in the Premier League.

2 Responses to Who do you want to go down?