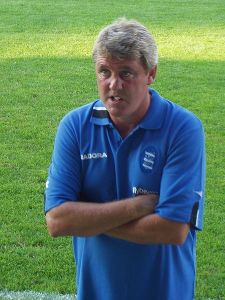 Steve Bruce in his Birmingham days

The pressure is mounting on Sunderland manager Steve Bruce as his team are about to face his former club Wigan at the Stadium of Light. Sunderland have lost eight of their last nine games and sit just above the relegation zone with 38 points. Wigan will be hoping to maintain their current good form and move further away from the relegation zone.

Bruce’s teams have a tendency to fade in the second half of the season and Darren Bent’s untimely departure has had a negative impact on Sunderland’s season. Some of the defending has been erring on the tragic and some key mistakes by goalkeepers Gordon and Mingolet have plunged Sunderland down the table and into the relegation battle. They will be without former latics defender Titus Bramble, who is a key player in the defence and also striker Frasier Campbell.

Wigan will be without the suspended Maynor Figueroa and it is expected that Steve Gohouri will deputize as he did against Blackpool. Roberto Martinez’s men should not underestimate the importance of the game, as a win for Wigan could provide some breathing space from the relegation zone going into the last four games of the season.

Sunderland have invested heavily under Bruce and the expectation from the American owner Ellis Short was that Sunderland would be competing for a European place. The Wearsiders fans are growing restless with the Geordie born Bruce. The prospect of relegation was unthinkable at the beginning of the season, but if it was to happen, Bruce would almost certainly be on his way out of the Stadium of Light.

The reverse fixture at the DW Stadium ended in a 1-1 draw with former latic Lee Cattermole sent off. Now the Black Cats captain Cattermole recognises that Sunderland could be relegated, speaking to Sky Sports he said:

“I can understand why the fans are getting nervous. I can’t say we won’t get relegated, you never know. But we have to produce the goods to make sure that doesn’t happen.”

So the signs are that with the pressure mounting on Steve Bruce and with Wigan desperate for the points it is going to be a tense encounter at the Stadium of Light. I am not expecting a high scoring game, and with so much at stake I’m going for a low score draw. A point will do the latics, but a point for Sunderland is not likely to keep the home fans happy.