Posted on September 19, 2022 by ianhaspinall 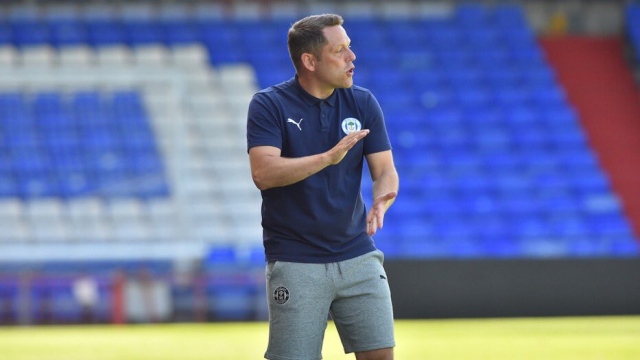 Leam Richardson with food for thought after defeat to Reading

Leam Richardson made two changes from the 2-1 victory at Huddersfield Town in midweek with Ben Amos and captain Tendayi Darikwa returning to the starting line-up in place of Jamie Jones and Ryan Nyambe.

It was a slow start to the game with neither team creating any real opportunities in the early stages.

The first chance came in the 24th minute when the visitors Andy Yiadom cut the ball back to Jeff Hendrick who fired over the crossbar from just six yards out.

Latics responded and Darikwa’s deep cross found Josh Magennis at the far post, but the striker headed narrowly wide of the post.

The hosts had another rare opportunity in the 42nd minute. Magennis knocked the ball onto Aasgaard who did well to find space but his shot from just inside the penalty area flew high and wide of the left hand post.

Paul Ince’s side were looking for a reset after their heavy defeat to Sunderland and both teams seemed reluctant to take any risks in a mediocre first-half.

The visitors made the better start to the second half and created a great opportunity in the 59th minute. Ince’s corner came to Junior Hoilett and the winger crossed low to defender Tom McIntyre who looked odds on to score but fired wide from inside the penalty area.

But the visitors were ahead in the 62nd minute. There was a debatable foul by Max Power on Ince on the edge of the Latics area awarded by referee David Webb.

Ince took the resulting free-kick and curled the ball superbly into the top right-hand corner.

Latics tried to respond with Keane nearly finding the equaliser in the 67th minute.  James McClean crossed to the near post where Keane’s flicked header came back off the inside of the post and was cleared away to safety.

Reading then nearly doubled their lead, when McIntyre found himself free on the left-hand side and crossed to Ince who headed down into the turf and saw it bounce over Amos’ crossbar.

Latics then had a great chance to equalise when Keane did well to find Lang in space but the striker failed to show composure and fired his strike high over the crossbar.

The hosts continued to push for an equaliser but the visitors nearly added to their lead on the counterattack with ten minutes remaining.

Ince played substitute Yakou Meite through on goal but Amos did brilliantly to  come off his line and block Meite’s strike.

Latics continued to press forward and late on substitute Charlie Wyke nearly got on the scoresheet when his header under pressure from a defender cleared the crossbar.

It had been a strangely subdued Latics home performance in contrast to their excellent away displays.

Overall Reading had managed the game better than Latics and it was one moment of quality from Tom Ince that had decided the three points.

Richardson will have plenty of food for thought during the international break prior to their next game at Rotherham on the 1st October.

It is something of a mystery why Latics have not won at home and have not lost away. They have only managed three points at home but have been excellent on their travels and gained ten points.

Some fans have blamed Richardson’s tactics for the lack of home wins but these tactics have been effective away from home and with the same squad of players.

Why Latics have struggled at home this season could be for a variety of reasons: the step up in quality in the Championship; the expectation that you should win your home games; the psychological mindset required to perform consistently and the inevitable fine margins in a tight division.

Grabbing that first home win and achieving consistency now is the challenge for Latics in an extremely competitive Championship.

Speaking afterwards, Richardson admitted that while it wasn’t their day at the DW Stadium, they will be using the disappointment in a positive way.

“The game was there to be won, and I think we played with enough energy, impetus and sharpness during the first half.

We had to take the game to them and try and make those opportunities. We controlled possession and had enough shots but not enough on target.

We didn’t really put them under enough pressure (compared) to what we normally do. We have to play at a certain level to be the best versions of ourselves and we just dipped a little.

As a team collectively, we’ve got to be better, sharper and more productive with what we do. We took the game to them towards the game and we had enough final third entries – we hit the post and had a couple of chances – but it’s a tough league and we’ve got to be at it every single time we take the pitch.

We are still learning and growing as a group, as a team. Today, it’s not our finest day but we’ll learn from it and quickly educate ourselves and be better.

We will certainly know the next time how we become more productive, and sharper in certain areas, which will help us be productive.”