Posted on September 19, 2021 by ianhaspinall

Charlie Wyke off the mark with an impressive double 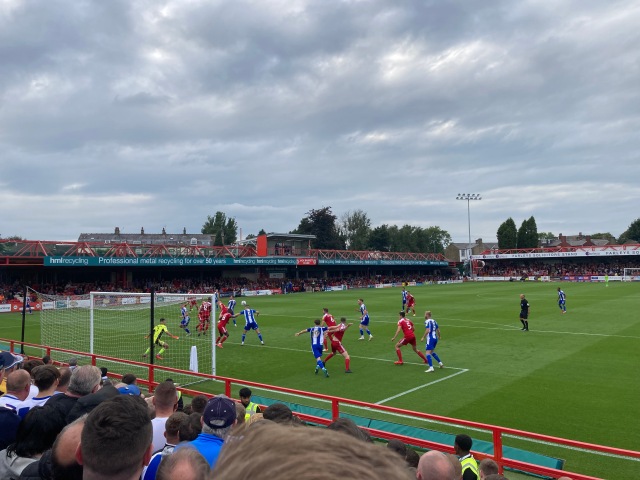 Leam Richardson named an unchanged side from last weekend’s win over Doncaster Rovers.

Latics were quick out of the blocks and Callum Lang was denied brilliantly from close range by James Trafford.

From the resulting corner Whatmough thumped the ball home at the back post to put Latics ahead after seven minutes.

Latics continued to press forward and first Keane and then Callum Lang went close to increasing the lead.

The visitors did add to their lead on 18 minutes when Keane powerfully headed home a well delivered cross from Power.

McClean then went through one-on-one with Trafford but the winger was unable to capitalise and the keeper saved comfortably.

2-0 to Latics at half-time but it could so easily have been four or five.

The visitors continued to dominate at the start of the second half with Keane, McClean and Kell Watts all going close inside the opening five minutes.

But against the run of play it was the hosts who scored next when Nottingham fired spectacularly into the top corner from just inside the box.

Keane played a neat pass to Wyke inside the penalty area, who then produced a delicate chip over the advancing keeper Trafford to send the Latics travelling support into raptures.

In added time Wyke rounded off a superb team performance with his second and Latics fourth goal.

This had been a consummate away performance and after four straight wins it sends a message to the other teams in the division that they are strong promotion contenders.

“I have to say, all of the credit goes to the players – I thought the work ethic, work rate, application from start to finish was excellent and they carried it out flawlessly.

But Richardson urged calm despite such a strong start to the season.

“We have been in many campaigns and we know the tasks ahead of us and all of our challenges,” he explained.

“We will enjoy tonight but quickly our attention turns to Sunderland on Tuesday night.”