Wigan Athletic produced a much improved performance against League One leaders Lincoln City but ultimately slipped to another damaging defeat.

In an evenly fought encounter Latics took the lead on 33 minutes with Callum Lang’s wonder strike found the top right corner from 30-yards out.

But within a minute the Imps were level as keeper Jamie Jones collided with Luke Robinson and Anthony Scully bundled the ball home from close range.

Tom Hopper had a great chance to put the visitors ahead on 57 minutes when he headed into the side-netting from close range following a corner, but the striker later produced a fine finish on 73 minutes when he turned Curtis Tilt before curling his shot past Jones.

The hosts had plenty of chances to draw level but Jamie Proctor fired over, Lang headed over the angle and Will Keane poked narrowly wide from close range as they just couldn’t find the equaliser.

Latics remain second bottom in the table but are now four points from safety, while Lincoln retain top spot and are one point ahead of Peterborough.

Leam Richardson made three changes to the team defeated by Hull with Thelo Aasgaard, Callum Lang and Luke Robinson starting. League leaders Lincoln were looking to consolidate their lead at the top of the table and had only lost one of their last ten games.

It was a scrappy start to the game in windy conditions. Latics had the first opportunity on 10 minutes but Funso Ojo blazed his effort over the crossbar from the edge of the box.

The visitors had a great opportunity on 16 minutes when Regan Poole was given too much space down the right but he side-footed his shot narrowly wide from a good position inside the box.

Viv Soloman-Otabor fired straight at Alex Palmer when a shot to either side might’ve resulted in a goal on 21 minutes and Robinson’s shot was partially blocked on 28 minutes when a clear strike might’ve beaten Palmer.

Latics went ahead on 33 minutes with a superb piece of individual play by Lang, the striker drove forward before unleashing an unstoppable drive from 30-yards which flew into the top right corner.

But almost immediately the Imps were level as Latics shot themselves in the foot – Jones was unable to deal with a cross and collided with Robinson and as the ball fell free Scully bundled the ball home.

Merrie blazed over the crossbar from 30-yards on 42 minutes and in the process seemed to damage his hamstring. He was subsequently withdrawn at half time and replaced by Gavin Massey.

Latics 4-3-3 formation continued to provide them with the hope of a victory. Solomon-Otabor produced a dangerous cross but Lang diving forward couldn’t quite make contact at the back post on 67 minutes.

Following a Latics attack Lincoln broke quickly and although the defence looked for offside Hooper was in the clear and although his run was initially checked by Tilt the striker turned the defender before curling his shot into the far corner.

Will Keane replaced Solomon-Otabor on 81 minutes as Latics pressed for the equaliser. Aasgaard blazed a free kick high over the crossbar before Proctor did the same from a great central position 12 -yards out.

Latics were carving out plenty of chances now and from Massey’s cross Lang headed inches over the angle of post and crossbar. In five minutes of added time Keane sliced his volley from inside the box just over the bar and in the 95th minute he riddled his way into the box past two defenders but agonisingly poked the ball wide from close range.

It just wasn’t to be for Latics who probably deserved at least a point for a much improved performance against the league leaders. Richardson and his players will be frustrated with the result but they will take heart from this performance going into the relegation six-pointer against Bristol Rovers on Tuesday night. 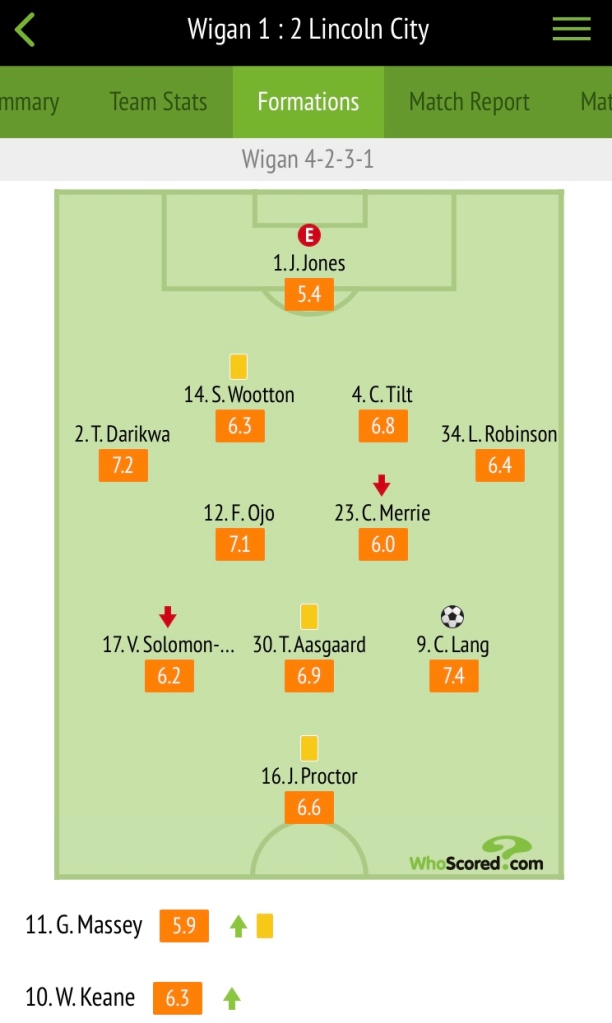