Callum Lang scored on his first League One start

Wigan Athletic missed an opportunity to move out of the bottom four in League One when they were held to a 3-3 draw by 10-men Rochdale.

In a fast and furious opening to the game Rochdale went ahead on seven minutes when Stephen Humphrys deflected shot evaded Owen Evans but Latics were level on nine minutes when Kyle Joseph turned home Dan Gardner’s cross from close range.

The visitors were ahead on 15 minutes when Callum Lang slotted his first Latics League One goal from inside the box after good work by Will Keane and Joseph. Latics were causing the hosts plenty of problems and should have increased their lead with Lang twice going close.

The hosts were reduced to 10-men on 40 minutes when Jim McNulty kicked out at Joseph while he was lying on the ground. Early in the second half Latics looked to be in control but a mistake by keeper Evans allowed the hosts back into the game.

A long kick from Gavin Bazunu was headed past the hesitant Evans by Jake Beesley and centre-back Adam Long was injured while trying to make a goal-line clearance and had to be withdrawn.

Will Keane controlled the ball superbly inside the six-yard box before volleying high into the net to restore Latics’ advantage on 77 minutes but the visitors just couldn’t hold on to their lead and were left frustrated as they conceded a 95th equaliser when Humphrys headed home.

Wigan move up to 22nd place in the table and Rochdale are in 18th spot one point above the relegation zone.

Latics were looking to avenge the 5-0 drubbing by Rochdale at the DW Stadium in December but it was a much changed line-up for Leam Richardson’s team. Latics had lost several senior players and loan players in recent days.

Keeper Evans was making his league debut whilst Lang made his first league start after returning from loan at Motherwell. Jamie Jones and Charlie Jolley were both self-isolating from Covid and were unavailable for selection and Richardson could only name four players on the bench.

New signing Tendayi Darikwa was making his debut after signing from Nottingham Forest. Keane was named team captain for the first time after signing for the rest of the season.

In a brisk opening period both teams went close with Aaron Morley firing just wide for the Dale and Gardner testing Bazunu for Latics.

The hosts were ahead on seven minutes when Humphrys initial free kick came back off the defensive wall and the striker’s second attempt was deflected past Evans into the net.

Latics were soon level when Gardner’s low cross was turned home from close range by Joseph for his fifth goal of the season. The visitors were quickly into their stride and went ahead on 15 minutes when Keane and Joseph combined to set up Lang who slotted home from inside the box.

The hosts were reduced to ten-men on 40 minutes when McNulty was dismissed by referee Andy Madley for kicking out at Joseph while he was on the ground.

Latics looked likely to go on to increase their lead against the 10-men Dale in the second half.

Joseph went close on 47 minutes when he couldn’t quite make a proper contact with Gardner’s shot and an excellent turn and strike by Keane was turned over the crossbar by Bazunu soon afterwards.

But disaster struck for Latics on 58 minutes when Bazunu’s long goal kick cleared the Latics defence, Evans was hesitant and Beesley nipped in to head into the net despite the despairing efforts of Long who was injured in his attempt to clear the ball.

Latics continued to press for the winner with Darikwa making an impressive debut down the right.

But Latics restored their lead on 77 minutes when Keane superbly controlled the ball inside the six-yard box before volleying high into the net.

Pearce crossed for substitute Thelo Aasgaard on 80 minutes but the Norwegian youth international was only able to lift the ball over the crossbar from close range.

At the other end Evans made a good save from Dooley but Latics should have put the game to bed on 91 minutes when they broke quickly and had a three attackers against one defender but they failed to capitalise.

Seven minutes of added time and just when it looked like Latics would secure the three points to move out of the relegation zone they conceded.

Ryan McLaughlin crossed for Humphrys to rise above two Latics defenders to head past Evans for the equaliser.

Latics finished the game with four full backs in the back line due to injuries and a lack of back up but credit should be given to Rochdale for battling for a point with only 10-men.

Richardson will be pleased with much of Latics attacking play but the defence is very vulnerable without any established centre-backs. Is some kind of emergency loan going to be possible in their currently constrained circumstances? 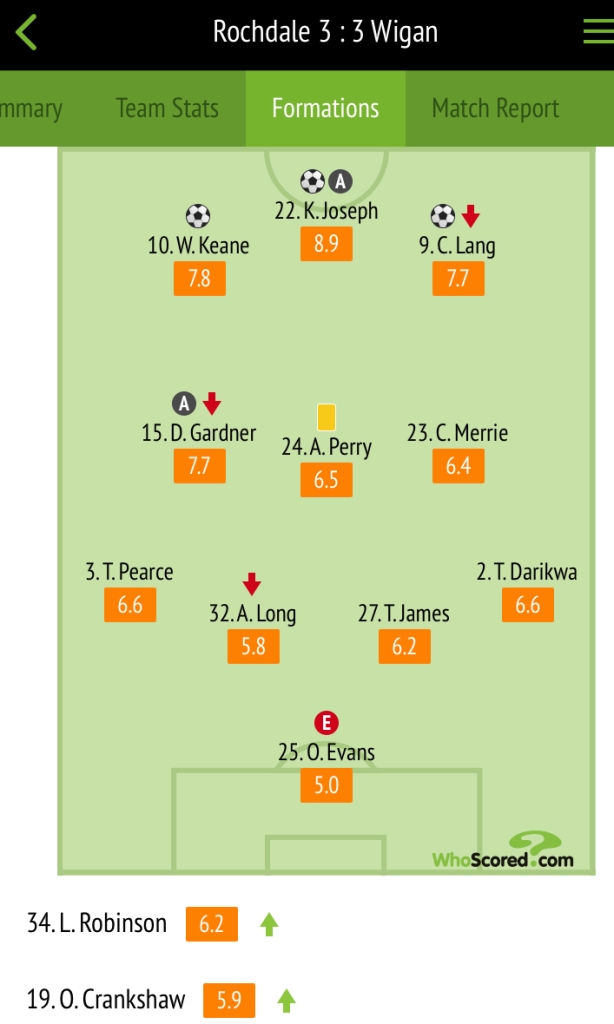