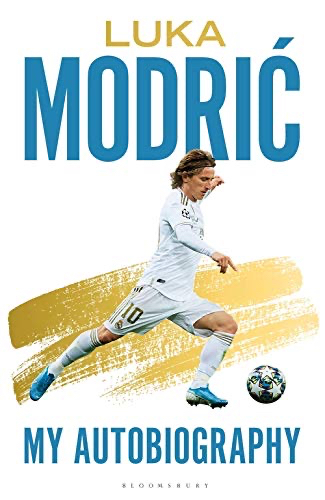 His autobiography written in conjunction with journalist Robert Matteoni and translated from Croatian recounts his remarkable story from his early life in war-torn Yugoslavia and through his many football achievements to his appearance in the 2018 World Cup Final.

Modric is undoubtedly one of the best midfielders of the last 20 years, alongside such stars as Xavi, Iniesta and Scholes, and was voted the best player of the 2018 World Cup.

The diminutive Modric, (he is only 5ft 7in) had to fight to be accepted as a professional footballer during his youth. His genuine love for the game and perseverance and dedication to succeed enabled him to reach the highest level of the game.

It is a phenomenal career and Modric’s story is an engrossing one. Although sometimes the story can lack real verve, this may be because the story is being retold via Robert Matteoni and also translated from Croatian. The retelling can also be a little mechanical at times with the prose efficient rather than exciting.

Modric has to contend with major setbacks such as the murder of his Grandfather during the Croatian War of Independence, the health issues of his wife Vanja and the court case after his transfer from Dinamo Zagreb to Tottenham. Modric was charged with perjury after his testimony in executive director Zdravko Mamic’s corruption trial. The charge was ultimately rejected, but during the trial Modric received death threats and was the most hated person in Croatia.

Despite these major setbacks Modric’s personal grit and determination to succeed shines throughout the book. Prior to the World Cup Final Modric believed his career had reached a peak.

“This is where my career and my story as a footballer reaches its conclusion. I’ve won everything with Real. I’m playing with Croatia in the FIFA World Cup Final. No matter how it ends, I feel I have accomplished what I hoped for.”

However, although Croatia lose the final against France, Modric’s career reaches new heights when he wins the player of the tournament and goes on to win that year’s Ballon D’Or.

Modric’s autobiography provides an illuminating insight into the career of one of the greatest players in the modern game. A player who dreamt of becoming a professional footballer but reached incredible heights way beyond his wildest imagination.

This review first appeared in the October/November 2020 edition of Late Tackle magazine.