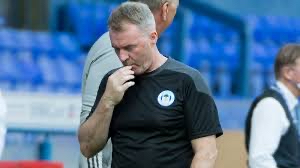 John Sheridan had a frustrating afternoon

Referee Ollie Yates was the centre of attention as Latics were narrowly defeated by Charlton Athletic in a hard fought fixture at the Valley.

Yates’s decision-making was erratic throughout, disallowing a Latics goal and twice denying penalty appeals when Will Keane and later Lee Evans appeared to be fouled in the box.

Despite the visitors best efforts the hosts secured the three points on 65 minutes when Jake Forster-Caskey’s expertly executed free-kick went in off the inside of the post.

Latics slip down to 18th in the League One table while the Addicks move above them to 15th spot.

Manager John Sheridan made several changes to the team which had been so convincingly defeated at Crewe with captain Joe Garner returning from injury. Dan Garner came into midfield and new signing Curtis Tilt made his debut in defence.

Tom Pearce was unavailable due to injury and Tom James moved over to left back and Gavin Massey moving to right full back, with Kal Naismith moving into the right midfield slot in a 4-4-2 formation.

After an even opening period Charlton had the first chance on ten minutes when Jamie Jones made an excellent reaction save at his near post to deny Forster-Caskey.

Forster-Caskey went close again on 18 minutes when his free-kick from 25-yards out clipped the top of Jones’ crossbar.

Latics first real chance came on 22 minutes when Evans’ corner found Darnell Johnson on the edge of the six-yard box and the Leicester City loanee headed powerfully towards goal only for Ben-Amos to make an excellent save.

Almost immediately afterwards Garner had a great opportunity to give Latics the lead but he volleyed wide from eight yards out after good work by Viv Solomon-Otabor on the left.

At the other end Chuks Aneke forced an important save from Jones after he turned quickly past Johnson and looked odds on to score until the Latics keeper intervened turning the ball around the post for a corner.

As the match moved towards half time Latics were struggling to clear their lines as Charlton upped the pressure.  The visitors were also giving away far too many free-kicks and corners. Forster-Caskey wasting an opportunity when his free-kick from 25 -yards sailed high over the crossbar.

0-0 at half time but some ominous signs for Latics as the hosts sought to take control.

Early in the second half Latics had a strong appeal for a penalty when Ryan Inniss looked to have fouled Keane in the area but referee Yates dismissed Latics’ appeals.

Seconds later Keane was involved in a disallowed goal for Latics as he challenged Akin Famewo and pulled the ball back for Garner to fire home but referee Yates once again ruled against the visitors.

On 65 minutes Latics conceded yet another free-kick around the penalty area and this time Forster-Caskey executed his free-kick perfectly as the ball went in via inside of Jones left-hand post.

Latics were feeling that the decisions were going against them and Massey was booked for dissent after he was penalised for a foul and yet another decision had gone in the the hosts favour.

The visitors were feeling aggrieved but they were building some momentum on the pitch and Solomon-Otabor’s low drive was spilled by Amos but Naismith couldn’t quite capitalise as the keeper recovered at his near post.

Latics looked like they had drawn level on 83 minutes when Garner’s cross wasn’t dealt with by Amos, Naismith teed Evans up to shoot and the Welshman’s shot crashed against the woodwork, but Latics players were furious that a penalty was not given as Evans was fouled as he went to shoot.

Despite the plethora of decisions going against them Latics continued to press for the equaliser right up until the 97th minute when Solomon-Otabor had his shot well saved by Amos.

It was a difficult afternoon for Latics as all the big decisions went against them. On another day they would have got at least a point from what was a very even game.

It was a much improved performance after the disappointing display against Crewe with debututant Curtis Tilt having a solid game in defence and Will Keane looking more comfortable upfront.

Tactically Sheridan’s decision to play Massey at right full back and Naismith wide on the right of midfield didn’t quite work out. I would personally prefer the left footed Naismith to play on the left hand side where he looks more comfortable and will pose more of an attacking threat.

It’s something for Sheridan to ponder and may depend on whether left full back Tom Pearce is available for selection on Tuesday night against Peterborough United.