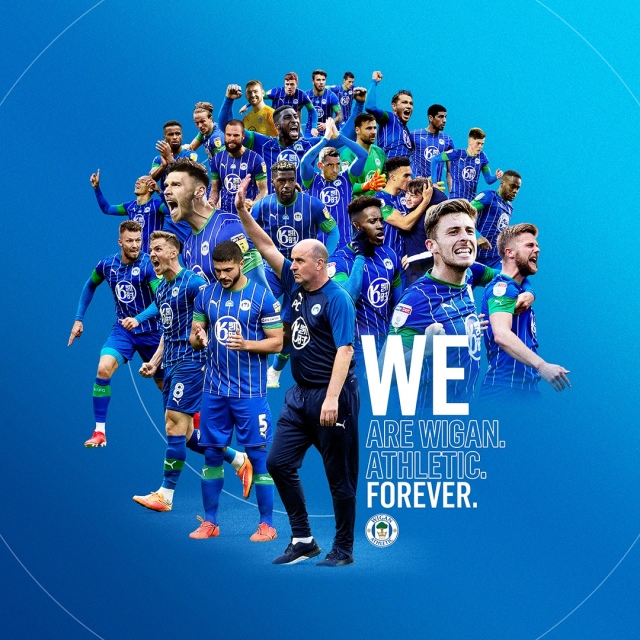 Latics were denied the victory they deserved against Fulham and which would have kept them in the Championship by a refereeing mistake.

Latics were leading 1-0 thanks to Kieffer Moore’s headed goal on 32 minutes when referee John Brooks mistakenly awarded Fulham a free kick on the edge of the area on 48 minutes after Joe Williams challenged Joe Bryan for the ball.

Neeskens Kabano drew the promotion-chasing visitors level from the resulting free kick. Raw justice for Latics who had almost overcome the farcical 12 point deduction imposed by the EFL.

Both teams had chances in the second half but it was to be referee Brooks’ error which had ultimately condemned Latics to relegation rather than the visitors exertions.

The other teams in the relegation struggle had mixed fortunes with Luton Town defeating Blackburn Rovers 3-2 and Charlton Athletic losing 4-0 at Leeds. Hull City lost 3-0 to Cardiff City but Barnsley won 2-1 at Brentford to stay up. Overall the results mean that Latics are relegated alongside Hull and Charlton unless their appeal is successful.

Latics started slowly and Fulham’s leading goalscorer Aleksandar Mitrovic had a glorious chance after only 90 seconds but he blazed over the crossbar from 12 yards out.

David Marshall then had to make a good save on 14 minutes from a powerful Kabano drive.

The hosts gradually asserted themselves with Kal Naismith forcing a save from Marek Rodak low down to his right.

Jamal Lowe had an opportunity on 24 minutes when he broke clear but instead of going for goal he pulled the ball back and the danger was cleared. Samy Morsy then tried his luck from distance but his strike swerved wide of the target.

On 27 minutes Latics thought they had gone ahead when Moore tapped home after Naismith’s close range effort was saved but the linesman ruled it out for offside.

But on 32 minutes the hosts were deservedly ahead as Nathan Byrne burst forward down the right and clipped a superb cross to the back post for Moore to head past Rodak.

1-0 to Latics at the interval but early in the second half the hosts were undone by a terrible refereeing mistake.

Williams won the ball cleanly on the edge of the area but referee Brooks awarded a free kick and bizarrely gave Williams a yellow card.

Kabano stepped up and expertly curled the ball over the wall and into the top corner. It had been a horrendous decision by the referee and it was to prove so crucial in their ultimate relegation to League One.

Despite the setback Latics continued to press forward and when Leon Balogun surged forward and got on the end of a great cross by Byrne they almost went ahead again but Rodak produced an excellent save diving low down to his right.

Robinson then surged forward to set up Kieran Dowell down the left hand side but the Everton loanees strike only found the side netting.

Naismith drilled wide from the edge of the area on 77 minutes before Williams fired narrowly wide on 79  minutes. At the other end the visitors had a chance on 81 minutes when Bryan got forward but his effort from distance didn’t trouble Marshall.

Cook introduced Joe Gelhardt for Dowell on 83 minutes and the young striker almost immediately made an impact breaking forward only for Michael Hector to haul him down with a cynical foul on the edge of the box.

On 87 minutes Naismith had a shot just over the crossbar before he had another strike well saved by Rodak soon after.

In added time Gelhardt forced another good save from Rodak but Latics just couldn’t find the winner that their performance had deserved.

A cruel end to the season after a monumental effort by Latics’ players. Their performances since lockdown have been exceptional and many have been during the administration crisis.

Cook and the players should be extremely proud of the character, determination and skill they have shown in adversity. They did not deserve this ending to the campaign.

Without the EFL’s 12 point deduction Latics would’ve finished comfortably in mid-table after a great second half to the season.

However, they now face relegation unless their appeal against the points deduction which is due to take place on 31 July is successful. If there is any justice in football the appeal will be successful but don’t hold your breath.