Review: After Extra Time and Penalties – Memories of a BBC Football Correspondent by Mike Ingham 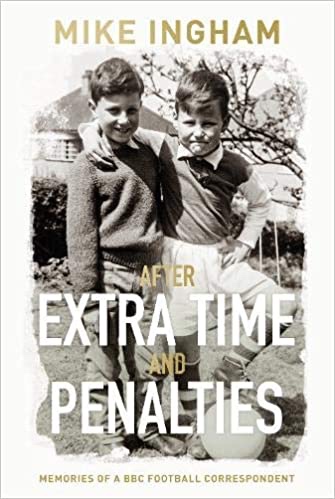 Ingham recounts his life story and the characters he has come across with warmth and a deep understanding of the beautiful game. The early chapters are a little pedestrian, but the book picks up pace and interest as he recounts his early interviews with John Arlott, Jack Nicklaus, George Best and Brian Clough.

Ingham commentated on the European Cup Final between Liverpool and Juventus at Heysel Stadium when 39 Juventus fans lost their lives and this tragedy has haunted him since.  He makes a telling point when he says Bill Shankly would never have wisecracked about football being more important than life and death had he still been alive in 1985 at the time of the Heysel Disaster.

Tragedy and lives cut short is sadly a recurring theme in the book, Ingham’s close friend and colleague Peter Jones died prematurely at the age of 60 and was at Heysel and Hillsborough and deeply scarred by the two disasters. There is an emotional tribute to another friend and colleague Bryon Butler, one of the great sports broadcasters, who died of cancer at the age of 66.

Ingham pays a glowing tribute to Bobby Moore, who tragically died of cancer aged only fifty-one.

Here’s extract from his scripted broadcast, “Bobby Moore, indestructible defender, ambassador, unique English footballing figure is no longer around to remind us how the national game at its very best can be a thing of dignity, beauty and integrity. He was the best, Pele said so, and that has to be the final word.”

Ingham bemoans the fact that scripted and recorded broadcasts when you would be given time to collect your thoughts and express your feelings are rare these days. When everything had to be live, he finds himself deeply frustrated at not being given the chance to say what he wanted, having been at the mercy of someone else’s agenda.

He is rightly frustrated by the decision of 5 Live to do away with a second commentator, he believes that on the radio the voice is pre-eminent and over 90 minutes – plus often extra-time and penalties – one voice, no matter how mellifluous, can be a hard listen. Test Match Special would never dream of having just one cricket commentator for the whole of a two-hour session.

He is also critical of the BBC’s bureaucracy, believes sport has been relegated in the BBC’s hierarchy of importance, and states that a perennial problem in the organisation is the lack of value placed on experience.

He observes, “In the last year, five respected broadcasters with over one hundred and fifty years of service between them have been allowed to leave BBC Sport.”

That’s a sad indictment of the BBC’s current decision-making, but at least Ingham has been able to provide a worthy tribute to the golden age of sports broadcasting.

The wide-ranging, entertaining stories and anecdotes about players, managers, commentators and summarisers provides a special insight into when sports radio was so important in many peoples’ lives.

After Extra Time and Penalties: Memories of a BBC Football Correspondent by Mike Ingham, Published by The Book Guild, Price £12.99.