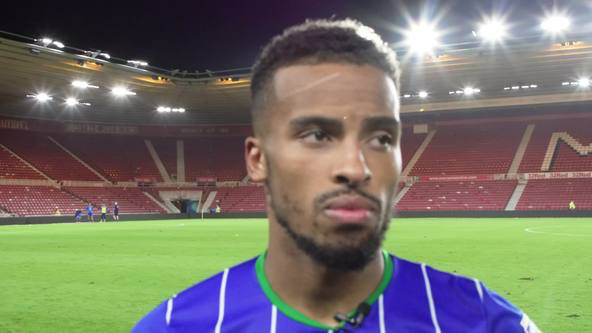 Latics slumped to a 2-1 defeat at Swansea City and slipped deeper into relegation trouble.

Paul Cook’s team have won only once in the last 17 games and the club seems to be sleepwalking towards League One after another toothless display.

Nathan Byrne had given Latics an early lead at the Liberty Stadium but goals from Liverpool loanee Rhian Brewster and Andre Ayew had ensured that the Swans got a deserved victory.

Latics remain second bottom in the Championship table, two points from safety, while Swansea move up to fifth.

Latics made one change from the team beaten by Bristol City with Joe Garner replacing Josh Windass. Kieffer Moore returned to the bench, but Joe Gelhardt was absent due to illness.

The hosts started the stronger but Latics had an early opportunity when Kieran Dowell crossed for Joe Williams, but the midfielder headed over the crossbar.

On 17 minutes Latics were ahead from a counter attack with Antonee Robinson combining well with Dowell, who pulled the ball back for Byrne, who slotted home past Woodman.

But the Swans were level almost immediately as Kal Naismith gave the ball away in defence and Conor Gallagher set up Brewster who finished past David Marshall.

Ten minutes later the Swans had a chance to go ahead when Connor Roberts squared for Gallagher, but the midfielder fired over the crossbar.

Early in the second half Dowell provided an opportunity for Robinson but the full back’s effort was cleared by Ben Wilmot.

Robinson then provided an inviting cross for Garner to restore Latics’ lead but the striker wasted the opportunity heading just over.

Just before half-time, the Swans nearly went in front as Bersant Celina escaped Byrne on the left and beat Marshall but Naismith was luckily on hand to clear the ball from going over the line.

Then in first half stoppage time the hosts missed another great opportunity as Ayew headed wide with the goal at his mercy.

In the second-half Latics continued to be on the back foot as the Swans threatened.

Brewster saw an effort blocked by Kipre before Kyle Naughton had an effort deflected just wide.

With just over 20 minutes remaining Swansea deservedly went ahead as Celina crossed for Ayew to convert at the near post.

Dowell was once again Latics’ most creative player and he created a chance for substitute Moore but the striker headed back across goal and the ball was cleared.

Celina then had a great chance to seal victory for the Swans but he dragged his effort wide.

In stoppage time Latics had a great chance to steal a point as Moore broke clear for a one on one with Woodman but the Wales striker’s tame effort was easily saved by the Swans keeper.

Latics dreadful run of form continues and the prospect of relegation gets ever nearer.

The Latics board should have made a change in manager prior to Christmas to address the decline but their reluctance to sack Cook has only led to further defeats.

As it now seems that Cook will be in charge for the foreseeable future, we can only hope for a radical rethink from the manager if Latics are to escape the drop.

The manager must review his current tactics, team selections and produce a strategy for survival plus the board must act ambitiously in the transfer window.

An experienced striker is a clear priority as well as additional defensive cover.

It is still possible for Latics to escape relegation but it can only come from a radical change in approach from Cook and some key additions to the team.