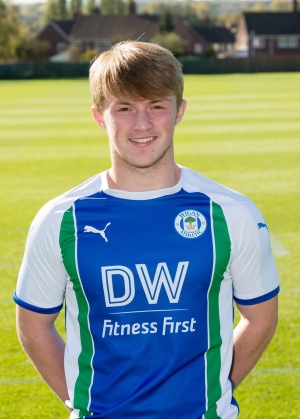 Latics 17-year-old striker Joe Gelhardt continued his impressive international form with three goals in six days for the England U18s. Gelhardt scored twice in a convincing 5-2 win against Poland last Friday and followed it up with a goal inside 12 seconds against Austria on Wednesday in a 3-2 victory.

The Liverpool born prodigy is generating plenty of interest from Premier League scouts and rumours that both Liverpool and Everton are considering transfer bids have been circulating.

Gelhardt is under contract until the summer of 2021 but the prospect of moving to a local Premier League club could tempt him away from the DW Stadium.

Comparisons with former Liverpool and England striker Michael Owen may be a little premature but the young striker has a prolific goal scoring record at youth level and has already produced an incredible strike for Latics in the 2-2 draw at Hull City in the Championship.

‘Joffy’ is an instinctive finisher and his first goal for Latics demonstrated his ability to score in the blink of an eye. He linked up with Jamal Lowe down the right hand side and then turned inside his marker before unleashing an unstoppable left foot strike past the Hull keeper from the edge of the box.

Gelhardt is capable of playing anywhere across the front line but his best position at the current time could be up alongside big striker Kieffer Moore who has been starved of support since joining the club in the summer.

Like Reece James who made a massive impression last season, Joffy is very grounded for a 17-year-old and appears to have the right temperament to make the step up to the first team.

The young striker has only appeared as a late substitute four times and only played 73 minutes so far this season but when he has appeared he has always looked a threat and likely to create something for the team.

Manager Paul Cook has been reluctant to put too much pressure on the youngster and has limited his game time but with the team desperately in need of goals surely Gelhardt’s time has come.

Latics face tough fixtures against Nottingham Forest at the DW Stadium on Sunday and then at Pride Park against Derby County on Wednesday night but Gelhardt needs to start a game soon rather than be a bit part player from the bench.