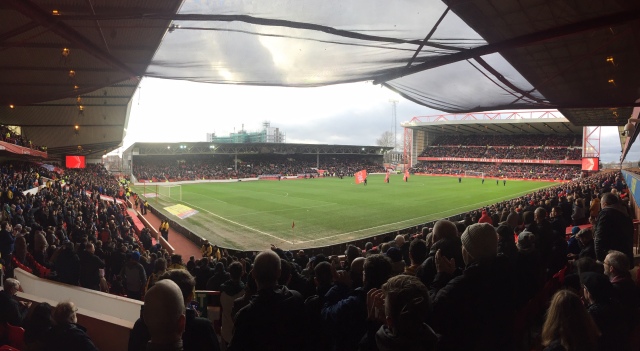 Despite matching Nottingham Forest for long periods Latics crashed to another away defeat at the City Ground.

This was an improved performance on last week’s defeat at Sheffield Wednesday but Latics’ failure to capitalise on their chances and some clinical finishing by Forest contributed to their downfall.

Forest went ahead after 19 minutes when Joe Lolley unleashed an unstoppable drive past Jamie Jones into the far corner of the net.

In an even second half it was the quality of Forest’s finishing that swung the game in their favour.

Matty Cash restored the hosts lead on 48 minutes when he produced a quality finish from the edge of the area and Adlene Guedioura sealed the three points with another unstoppable finish from 20 yards on 80 minutes.

Latics had created many good goalscoring opportunities during the game but their failure to be clinical was typified by substitute Joe Garner’s inability to beat Pantilimon with a late penalty kick.

Latics started brightly but with Forest’s first shot on target they went ahead when Lolley struck from 25 yards.

Latics were soon creating chances however and Kal Naismith had a free-kick tipped over by Costel Pantilimon and Cedric Kipre fired over Reece James’ corner.

Nathan Byrne might have done better when he headed over a Windass cross at the near post and soon afterwards Latics drew level when Windass’ strike from 25 yards evaded Pantilimon.

All square at the break but Forest went back in front early in the second half when Cash was able to turn Naismith on the corner of the 18 yard box and produce a superb strike past Jones.

Latics then had a glorious opportunity to draw level when Vaughan found himself unmarked but he somehow failed to connect cleanly with the ball and although Kipre was following up the big defender was denied at close range by Pantilimon.

The visitors continued to press forward in search of the equaliser and Jacobs curled an effort narrowly wide of the far post.

Gibson drove straight at Pantilimon from a good position and it appeared only a matter of time before they would be level.

But on 80 minutes Forest increased their lead with another clinical finish this time from Guedioura.

James then struck the angle of post and crossbar with a 25-yard free-kick before Windass was brought down in the area but Garner failed to convert the spot kick.

In added time Garner raced clear of his marker but once again failed to make the opportunity count as Pantilimon saved easily.

Yet another away defeat but it was an improved performance from the previous week. This time it was Latics’ inability to convert their chances and Forest’s clinical finishing that had been the crucial difference.

Paul Cook’s options continue to be limited by the injuries to Nick Powell, Will Grigg, Gavin Massey and Anthony Pilkington but the forthcoming transfer window could well decide the manager’s future.

Some fans are turning against Cook after a 13 game winless away run and if their most prolific goalscorer and fans favourite Will Grigg is allowed to leave the club it will be regarded as an act of self-harm and inevitably produce a backlash.

Latics need goals if they are to survive in the Championship and selling your best striker is definitely not the way to go about it.