Posted on November 8, 2018 by ianhaspinall 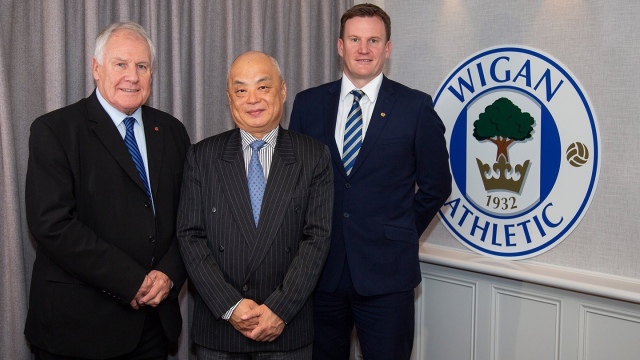 Following the takeover of Wigan Athletic by the Hong Kong-based International Entertainment Corporation (IEC) it has been revealed that father and son Joe and Darren Royle will be guiding the club going forward.

Dave Whelan and his grandson David Sharpe have steered the club for the last 23 years and now another family duo with the backing of IEC will have a big say in the future of Latics.

Former England international footballer Joe Royle, 69, has become a Director of the club and son Darren, 44, will be Executive Chairman.

Joe Royle has a very successful track record in professional football and is a member of the League Managers Association Hall of Fame of English Football and has played at the highest level in a career that spanned 556 games, in which time he scored 188 goals for teams such as Manchester City and Everton.

During his club career, he played for Everton, Manchester City, Bristol City and Norwich City. Following the end of his playing career Royle managed over 1000 competitive league games for clubs such as Manchester City, Everton, Oldham Athletic and Ipswich Town.

Only this season Oldham Athletic renamed their North Stand the ‘Joe Royle Stand’ in honour of their club’s greatest ever manager.

It is understood that Darren Royle was instrumental in introducing IEC to the Whelan family and was responsible for brokering the takeover deal with Wigan.

Darren Royle introduced the Hong Kong-based organisation to several English Football League clubs including Oldham Athletic and Ipswich Town, but after viewing the facilities and speaking to the Whelan family they decided to purchase Wigan.

IEC have subsequently appointed Darren Royle as the Executive Chairman with responsibility for developing all aspects of the club including improving the Academy. The main aim however, for the Royles and IEC, being promotion to the Premier League.

Royle played football at non-league level but football business has always been his passion and he has worked with some of Europe’s top football brands in a commercial capacity. In the UK, he has specifically developed an entire tier of academy football in the English football pyramid.

He is also co-founder of a new MBA qualification with Manchester Metropolitan University for Sporting Directors. Prior to the football business, he worked in senior management in the pharmaceutical industry where he completed an MBA in Marketing and Finance whilst holding an MSc in Exercise & Nutrition Science and BSc in Sports Science and Psychology.

Other members of the four man Board will be Thomas Chan who is an executive director of IEC, having been the group’s general counsel since February 2017 and Latics’ current Chief Executive Jonathan Jackson.