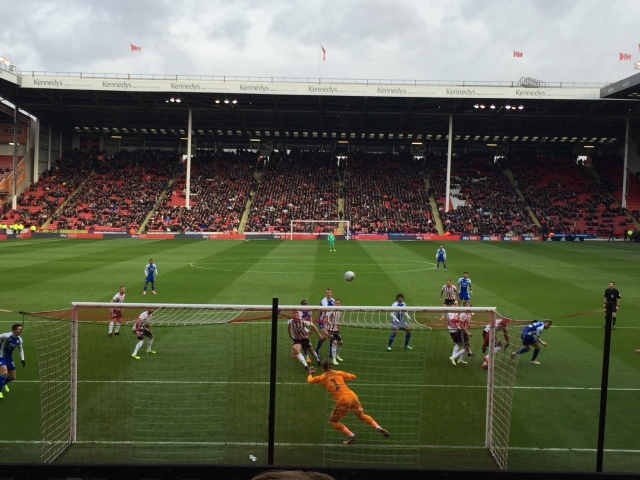 Latics had the better of the opening exchanges but went behind to a calamitous own goal from Chey Dunkley, the ball deflecting off Callum Connolly before the centre back diverted it into his own net.

Latics quickly drew level when substitute Kal Naismith finished from close range after a good cross by Nathan Byrne. But the Blades restored their lead before the interval when Billy Sharp produced a neat finish after a knock back at the back post from a set-piece.

Eight minutes after the restart the Blades increased their advantage when Sharp added his second goal from Leon Clarke’s excellent low cross.

The prolific striker then completed his hat-trick on 63 minutes when a hesitant Dan Burn allowed Sharp to lift the ball over Christian Walton from inside the six-yard box.

Joe Garner reduced the deficit on 69 minutes when he finished well from Josh Windass’ cross and Latics had further opportunities before the final whistle but it was all to no avail.

Paul Cook made four changes from the team which lost at Millwall with Nick Powell, Gary Roberts, Nathan Byrne and Antonee Robinson coming into the starting line-up. Cedric Kipre was surprisingly rested and Burn joined Dunkley at centre back with Robinson at full back.

Latics started the brighter with Powell having an early header saved before Reece James blazed over from 25 yards.

Their best opportunity came when Dunkley rose high about the Blades defence but couldn’t direct his header under the crossbar from a Roberts corner.

Latics then conceded a very sloppy goal following a quick throw in. Chris Basham’s pull back from the byline hitting Connolly before being diverted by Dunkley into his own net.

Naismith replaced Roberts on 36 minutes and the substitute scored his first goal for the club from close range after an excellent cross by Byrne down the right hand side.

But the Blades were quickly back in front as Latics failed to defend a set-piece and Sharp demonstrated his excellent finishing skills from the edge of the six-yard box.

McGoldrick had an a great opportunity just before the interval but Robinson did well to get back and make an excellent block.

Early in the second half the Blades did increase their lead as Sharp was once again in the right place at the right time to convert Clarke’s low cross.

On the hour mark the points were effectively sealed as Sharp completed his hat-trick flicking the ball over Walton inside the six-yard box despite Burn being in close attendance.

Garner reduced the deficit on 69 minutes with a neat finish from a Windass’ cross and Latics continued to work hard and create opportunities in the remaining minutes.

Reece James’ free kick forced an excellent finger tip save from Dean Henderson and then Naismith fired across the six-yard box with no Latics player on hand to convert.

At the final whistle the Blades moved to the top of the Championship table. Latics had caused the new league leaders plenty of problems going forward and had it not been for several defensive lapses and the brilliance of Billy Sharp they might have been coming away from Bramall Lane with at least a point.

Manager Cook will be looking to eradicate the defensive mistakes and hoping Leeds United do not have a striker in top-form like Billy Sharp in their next game at the DW Stadium next Sunday.