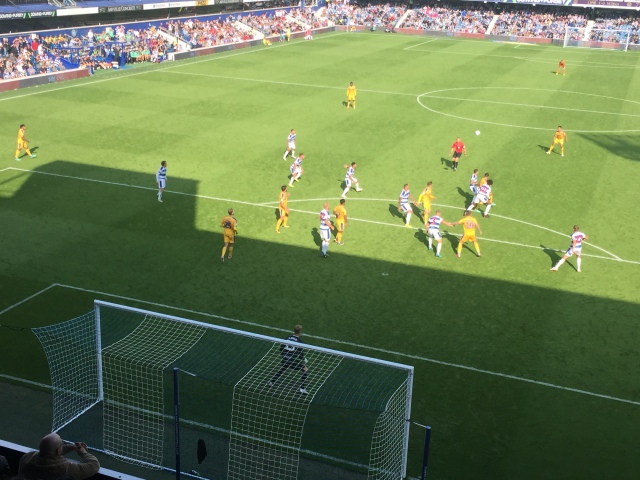 Latics were controversially defeated 1-0 at Loftus Road despite being the better team for most of this Championship fixture.

Queens Park Rangers gained the advantage in one controversial moment 10 minutes before half time when Chey Dunkley was clearly pushed from behind in his own box and Tomer Hemed was allowed to volley home.

Despite being informed by his assistants of the foul the referee Steve Martin ignored their advice and bizarrely awarded the goal.

The referee who might be better employed as a comedian rather than a Championship referee had an abysmal game throughout and his ineptitude was typified by this obviously incorrect decision.

Latics had several good shouts for penalties in the second half when they pressed for the equaliser but the referee failed to award a spot-kick.

Paul Cook made two changes to the team which had won so convincingly at Stoke City with Josh Windass replacing the injured Michael Jacobs and Nathan Byrne coming in for the rested Chelsea loanee Reece James.

Latics started strongly with Nick Powell at the centre of their best moves. The in-form midfielder forced a good save from Joe Lumley with a swerving 25 yard drive.

Lumley then produced a superb finger tip save to deny Windass whose curled strike from 20 yards was destined for the top corner of the net. From the resulting corner Powell headed narrowly wide of the target.

It seemed only a matter of time before Latics would take the lead as they controlled possession and were creating plenty of chances.

But ten minutes before the interval Rangers controversially went ahead through Hemed despite all Latics’ protestations.

Rangers were buoyed by the decision and went close early in the second half when Luke Freeman fired narrowly wide.

But Latics were soon back on top with a Powell header diverted behind for a corner before the always creative Midfielder forced another save from Lumley.

At the other end Christian Walton produced a fine save to deny Rangers new loan signing Nahki Wells.

It was still Latics who looked the most likely to score and their best chance fell to Dunkley who headed agonisingly wide from Evans’ quality delivery.

As the minutes ticked down Latics continued to press and forced several free kicks in dangerous positions. They had a couple of good shouts for handball and Dunkley had his shirt pulled in the area but referee Martin evidently wasn’t going to give Cook’s team any important decisions on the day.