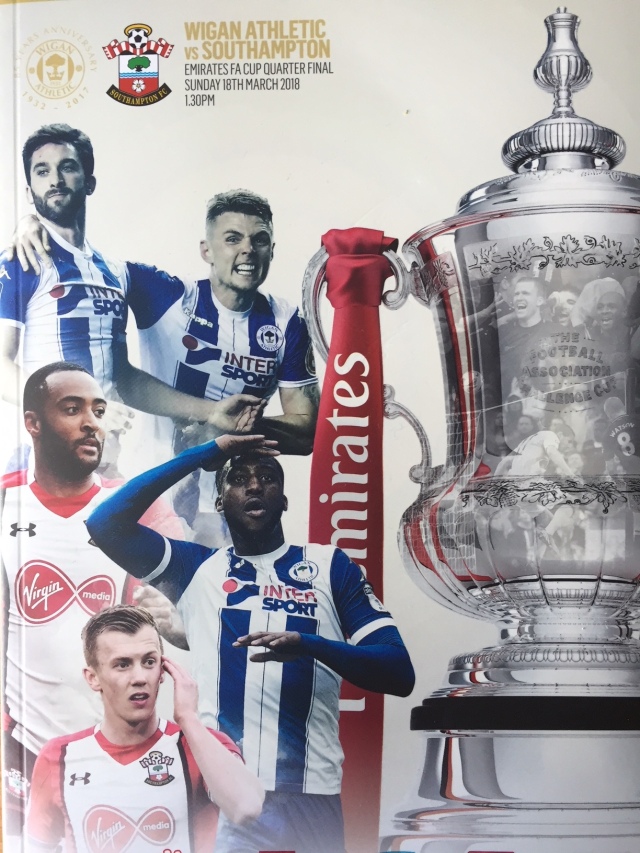 Small margins often decide games and on another day Wigan Athletic might now be preparing for an FA Cup semi-final at Wembley.

League One Latics had been the dominant outfit for long periods of the game and had a succession of chances but they just weren’t able to make the final touch count.

So it is Premier League Southampton who progress to face Chelsea with two second-half goals from Pierre-Emile Hojbjerg and Cedric Soares.

Paul Cook made two changes to the team that defeated Bradford City on Wednesday night with Gary Roberts and Will Grigg replacing the injured Nick Powell and the cup-tied James Vaughan.

Latics made a bright opening and Gavin Massey fired just over the crossbar after only five minutes.

Latics were pushing Southampton back into defence and in the windy conditions forced a succession of corners.

Following a short corner Nathan Byrne’s shot from the edge of the area was deflected into the path of Chey Dunkley but the big centre-half couldn’t make the vital contact and the ball went inches wide of the post.

Latics continued to dominate and Gary Roberts had a great chance to put them ahead when he tried to chip the keeper from the edge of the six-yard box but he looped the ball over the crossbar.

The Saints always looked dangerous on the counter-attack but Latics were in the ascendancy.

Great play by Massey set up Roberts in the area who fed Jacobs and then Grigg but the final shot was not forthcoming.

Michael Jacobs then broke free of the Saints defence but just when he should have set up Massey, who was in the clear, he went for goal and his shot was blocked by a defender.

Another dangerous cross resulted in Dunkley’s knock down to Grigg but the striker  couldn’t make the vital contact to put Latics ahead.

Jacobs sprinted free down the left and delivered a dangerous low cross which nearly found Grigg but the striker once again couldn’t make the vital contact inside the six-yard box.

A blistering first-half by Latics but unfortunately they hadn’t been able to make the breakthrough despite their dominance.

New Saints manager Mark Hughes will probably have given his players a hard talking to at the interval and his players responded as they gained more possession at the beginning of the second-half.

But it was Jacobs who might have given Latics the lead when he curled an effort over the angle of post and crossbar.

Gavin Massey then drove forward towards the Saints area but fired narrowly wide of the target from the edge of the box.

Sofiane Boufal curled a free-kick onto the roof of the net for the Saints.

The visitors should have been in front when Nathan Byrne inadvertently set up Manolo Gabbiadini with a poor back pass but Christian Walton made an excellent stop to deny him.

Walton then made another good save from Hojbjerg but the Danish midfielder was not to be denied and from the resulting corner he put the Saints ahead, firing through a group of players past Walton.

It was all Southampton now and when Gabbiadini was clean through on goal Dan Burn was forced to bring him down for a penalty.

But Walton made a superb one-handed save diving to his left to keep out the spot kick.

The hosts were still in it and Grigg couldn’t quite make contact after Powell’s initial effort came to him on the corner of the six-yard box.

Latics final chance came when Ryan Colclough’s deep cross found Noel Hunt in a great position at the back post but the Republic of Ireland international couldn’t convert the opportunity to draw them level.

It was all over in added time when Southampton went down the other end and Cedric ran free before finishing past Walton to send the Saints into the semi-final.

It had been a fantastic FA Cup run by Paul Cook’s team defeating three Premier League clubs including the Champions elect Manchester City. They had pushed Southampton all the way and with a little more luck they might still be in the competition.

Latics must now concentrate their minds on gaining automatic promotion with 12 cup finals to achieve the season’s primary target.