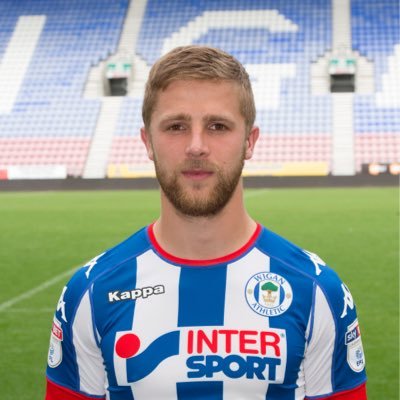 Michael Jacobs’ crucial 91st minute winner sent Latics’ fans into raptures at Valley Parade as they moved up to second place in the League One table.

On a terrible pitch and in blustery conditions both teams opted for the route one approach for most of the game.

But it was a moment of quality from Will Grigg that was the difference, his slide rule pass found Jacobs free in the box and the winger made no mistake with the finish.

Latics had had greater possession and fifteen shots to Bradford’s three but the game looked to be heading for a draw until Jacobs’ vital strike in added time.

Wigan move above Shrewsbury and are now five points behind leaders Blackburn with three games in hand.

Latics might have had a penalty early on when Jacobs appeared to be brought down when breaking into the area.

They then went close when Vaughan’s flicked effort came off the angle of bar and post following Nick Powell’s cross from the left.

Nathan Byrne had a speculative cross come shot which nearly deceived Colin Doyle but at the last moment the keeper managed to palm it away for a corner.

Latics were having the majority of the play and Massey’s deep cross found Powell at the back post but the midfielder couldn’t get his header on target.

The visitors had been on top for most of the first half, but in the difficult conditions there was always a feeling that a lapse in concentration or a mistake could let Bradford into the game.

Early in the second-half the Bantams Shay McCartan had a rare attempt on the Latics’ goal but he headed well off target from Tony McMahon’s cross.

Latics continued to press forward but they were not at their fluid best and many attacks broke down due to a poor final pass or cross.

They did have a good opportunity when Jacobs forced his way into the area but his shot at the near post only found the side netting.

Time was running out for the visitors but they kept pressing forward with substitute Grigg joined by debutant Devante Cole for the final minutes. Both Cole and Grigg looked dangerous as Latics started to play some controlled football in the final third.

As the match moved into added time, the vital breakthrough came when Grigg played a neat pass to Jacobs just inside the area and the winger produced a superb finish to give Latics a huge boost in the race for automatic promotion.