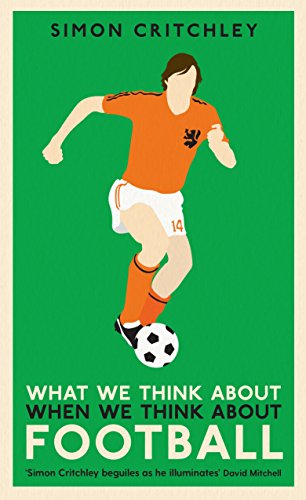 In this slim volume philosopher Simon Critchley attempts to make sense of the whole football experience and how we are affected in so many different ways by a sport that is so central to our lives.

Critchley identifies that football is about so many things: memory, history, place, social class, gender, family identity, tribal identity, national identity, and the nature of groups.

It is essentially collaborative, even socialist, yet it exists in a sump of greed, corruption, capitalism and autocracy.

This is a promising premise but unfortunately the book rarely delivers the expected insights and the author has a tendency to over-intellectualise the subject.

Some of the chapter titles give a fair indication of the author’s affected approach: Senate ecstasy, De-subjectifying football, What is it like to be a ball? Repetition without origin, Theatre of identity and non-identity.

Critchley says he feels closest to the philosophical tradition called, Phenomenology – the description of what shows itself to us in our everyday existence – he wants us to see the beauty of football with slightly different eyes.

But unfortunately the book becomes bogged down with references to academic works and philosophers and can be heavy going in places.

There are some interesting and noteworthy points. The book starts promisingly enough with an observation from Johan Cruyff. The iconic Dutchman states

‘Playing football is very simple, but playing simple football is the hardest thing there is.’

Later in the book he interestingly notes that when the Republic of Ireland plays Northern Ireland at football, Ireland is in effect playing itself.

‘It is a wonderful example of the differentiation of identity. It happened for the first time on 20th September 1978 and ended with no intended dramatic irony in a goalless draw.’

The understanding of football and the issues around it will always benefit from good analysis but in this case the author applies an academic and often overly intellectual analysis of the game, which is not particularly beneficial.

As a reader I was hoping for something less pretentious but which celebrates the emotions we experience at a football match like Daniel Gray’s wonderful book ‘Saturday 3pm – 50 Eternal Delights of Modern Football.’

The author’s allegiance to Liverpool FC is probably a little too evident in the text and as he tries to shoehorn his views on Jürgen Klopp into philosophical terms by applying Martin Heidegger’s ‘Being and Time’ into the chapter ‘Klopp-Time’.

His admiration of Zinedine Zidane and the way he describes a fairly average 2006 film about Zidane was also a little too gushing for me and bordered on the pretentious.

‘As Zidane leaves the pitch, he knows that it is finished. He looks helpless. As Kleist says in the final words of his essay on the puppet theatre. “This is the final chapter in the history of the world”.

Critchley has tried to apply a philosopher’s perspective on the beautiful game but ultimately this feels like an opportunity lost as the author struggles to provide many new insights.

This review appeared in the May/June 2018 edition of Late Tackle magazine.