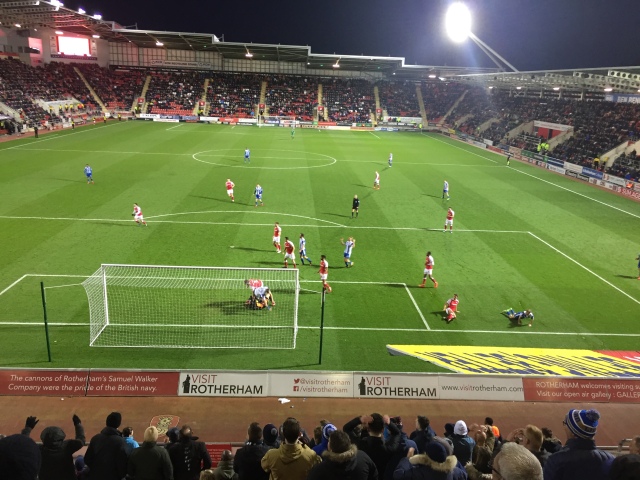 Latics moved to the top of the League One table with a convincing victory at mid-table Rotherham United.

Will Grigg gave Latics an early lead when he headed home Lee Evans’ left wing free kick but the Millers quickly drew level when David Ball curled his shot from the edge of the area past Jamie Jones and into the top corner.

Latics’ incessant pressure resulted in them regaining the lead on 28 minutes when Alex Bruce produced a clever flicked finish to beat the best efforts of keeper Marek Rodak.

Michael Jacobs effectively sealed the points with a venomous low drive on 60 minutes, after Rodak had done well to deny Grigg.

Latics had plenty of opportunities to add to the margin of victory but they settled for 3-1 and top spot in the table after Shrewsbury lost at home to Bradford.

Latics had to go into the game without important players Nick Powell (injured) and Dan Burn (suspended). Bruce replacing Burn in the centre of defence.

The visitors were on top from the outset with Grigg going close with a header from Max Power’s cross.

They went ahead on 14 minutes when Grigg scored his fourth goal of the season with a glancing header following Evans’ free kick.

Latics were almost immediately caught napping as the Millers hit a quick equaliser. David Ball was allowed too much space on the edge of the area and the former Fleetwood striker curled the ball into the top right hand corner.

But Latics were soon back on top and pressing to regain the lead. They were peppering the Millers area and it looked only a matter of time before they would score.

Chey Dunkley was denied at close range by Rodak and then the keeper turned a powerful effort by Ryan Colclough away for a corner.

From the corner Evans’ header was denied on the line, but Bruce who, with his back to goal, first controlled the ball and then flicked the ball with the outside of his boot past the despairing fingertips of Rodak and in off the post.

The game now became very physical with some robust challenges by the Rotherham players and in particular the big striker Kieffer Moore who used his arms to gain advantage.

Dunkley suffered after a clash with Moore and had to leave the pitch for stitches while the Millers player just had to change his blood stained shirt. Latics had to play with ten men for over ten minutes while Dunkley received treatment but the home team were unable to capitalise on the man advantage.

The Millers had Richard Wood and Michael Ihiekwe booked as matters nearly got out of hand with both sets of players squaring up to each other on a couple of occasions.

Rotherham had Richie Towell booked early in the second half for a late challenge on Nathan Byrne and Joe Mattock might have given a penalty away when he pushed  Colclough in the box.

Latics were in the ascendancy and playing the better football but Rotherham did occasionally threaten through their route one ball up to the big striker Moore.

When they did threaten, Dunkley was a rock at the heart of the Latics defence and the big defender had one of his best games since joining the club.

Latics effectively sealed the three points on the hour mark through Jacobs. Grigg initially broke clear in the box and tried to round Rodak, the keeper did well to push the ball away but only into the path of Max Power who back heeled the ball to Jacobs who finished with a powerful low drive past Rodak.

As the match moved towards its conclusion substitute Ivan Toney nearly added a fourth goal but his near post header just found the side netting.

It was another convincing performance by Paul Cook’s high-flying team and perhaps now some of their critical fans will give Cook and his team the full credit they undoubtedly deserve.