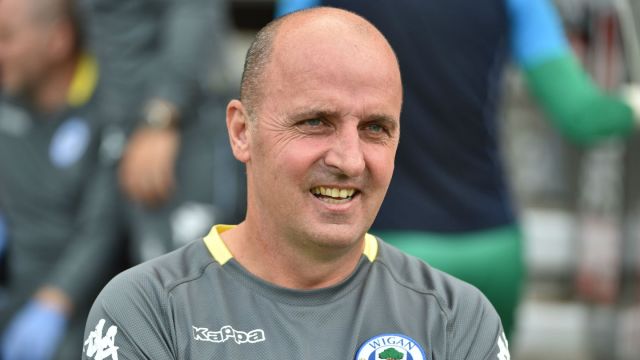 Paul Cook – the centre of attention

Latics unbeaten run came to an end as they lost 4-1 to Aston Villa in the Carabao Cup on Tuesday night but they will be hoping to maintain their winning League One form against Paul Cook’s former club Portsmouth tomorrow.

Pompey are expected to have a 2,000 strong following at the DW Stadium and they are likely to give Cook a noisy reception after he left them for Latics. There has even been talk of inflatable snakes and other gimmickry to chastise him.

The Pompey fans were obviously disappointed when Cook moved to the DW Stadium but surely he deserves tremendous credit for getting them promoted from League Two.

Portsmouth had been on a downward trajectory until Cook took over and transformed the fortunes of their club. They really should be very grateful for what he achieved during his time at Fratton Park rather than berating him for moving on.

There are a number of reasons for Cook’s decision to leave, but his desire for a new challenge at Latics, a return to his native North West and the takeover at Pompey by the former Chief Executive of Disney Michael Eisner were all contributing factors.

Many Portsmouth fans said they were actually pleased that Cook left, as they believe they now have a better manager in Kenny Jackett. Only time will tell who is right but Latics fans certainly feel that they have got the best of the deal.

Pompey’s fans have high expectations after the takeover by the Eisner family and the promise of investment. They wanted a fast start under new manager Jackett but they have had a mixed opening to the campaign winning one against Rochdale, drawing one against Walsall and losing one to Oxford United.

I still expect them to be challenging near the top of the table but they will not want to fall too far behind at the start of the season.

Latics made eleven changes during the week at Villa Park as Cook rightly demonstrated where his priorities lie. The cup game gave the manager the opportunity to assess his players returning from injury, fringe players and some of the younger players but he rested his League One starting eleven.

He will be expecting his first team to be refreshed and raring to go against Pompey but he also made it clear that he wasn’t happy with the second half performance at Oldham.

“From half time onwards we weren’t the better team on the pitch and we allowed Oldham to get a foot hold in it, so looking back I was a bit disappointed. I felt we should have been stronger and put the game to bed, but luckily we won the game and I’m sure everyone will be pleased with that. There’s still a lot of improvements and work to be done.”

It could be a feisty encounter tomorrow as Portsmouth will be keen to get one over on their former manager but Cook will be equally determined to show that he made the right choice coming back to Wigan.

This article was first published in the 12th Man column for the Wigan Evening Post on Friday 25th August 2017.