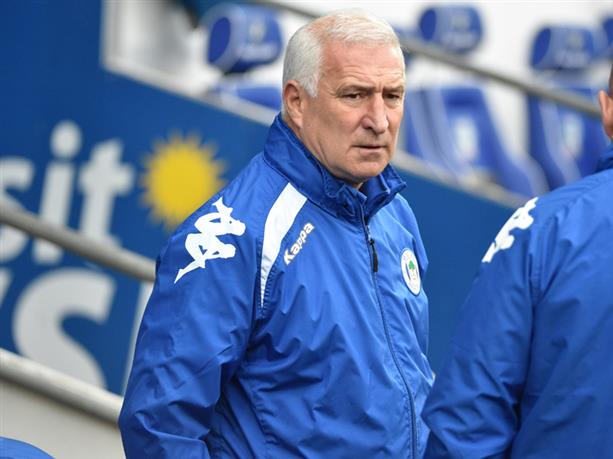 Interim manager Graham Barrow had done his best to rally the team after Warren Joyce’s time in charge.

Latics are on the verge of the third tier of English football after a dour 0-0 draw against Cardiff City.

Birmingham City were defeated 1-0 by Aston Villa on Sunday, but Latics must win their last two games and Birmingham and Blackburn lose theirs if they are to survive.

Despite dominating possession Latics were unable to create many clear-cut chances against some stubborn Cardiff defending.

The home fans had hoped that the introduction of the talismanic Nick Powell, who had scored five goals in his previous three substitute appearances, would make the breakthrough but it wasn’t to be.

They should probably have had a penalty when Shaun MacDonald was brought down in the box by Ecuele-Manga but referee Oliver Langford waved away the appeals.

Latics were on the front foot throughout the first half but they couldn’t find a way through a well organised Cardiff rearguard.

Michael Jacobs tried his luck from distance and then Burke picked up the ball on the halfway line and drove forward before unleashing a low drive which was narrowly wide.

Jacobs then produced a good cross which found Morgan on the edge of the six yard box but the defender was unable to make his effort count.

Cardiff might have taken an unlikely lead just before half time when a mistake by David Perkins set up Craig Noone whose shot skimmed the crossbar from close range.

The teams went into the interval level and the fans speculated as to whether Nick Powell and Ryan Colclough would be introduced immediately to try and keep Latics’ season alive.

Barrow waited until the 56th minute, when Powell and Colclough replaced Obertan and Hanson.

Powell was soon creating panic in the Cardiff defence and from a corner the ball fell to Dan Burn but his volley was blocked.

But despite Powell and Colclough’s introduction Latics were still failing to carve out any clear-cut chances.

With ten minutes remaining and in a desperate attempt to try and win the game Barrow pushed Burn forward as a second striker.

Colclough tried his luck from the edge of the area with a low drive but Amos saved at the near post. Powell then had an effort blocked on the line by substitute Rickie Lambert.

Latics were given four minutes of added time but they just couldn’t make the all- important breakthrough and the game ended in a frustrating draw.