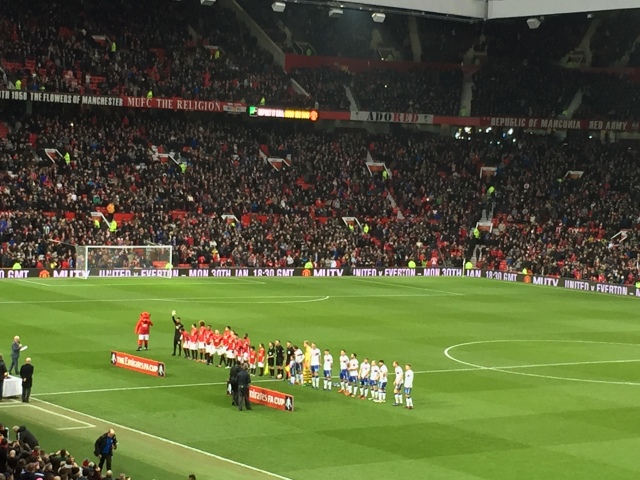 The teams line-up at Old Trafford

Manchester United progressed to the last 16 of the FA Cup with a dominant second half performance against Wigan Athletic.

Latics produced a brave battling first half display but were ultimately undone by United’s greater quality in depth.

The underdogs were edging the first half until Marouane Fellaini’s back post header broke the deadlock just before the interval.

Latics proved to be vulnerable in the air and Chris Smalling added a second header after 57 minutes.

Anthony Martial then set up Henrikh Mkhitaryan to add a third on 74 minutes, before Bastian Schweinsteiger completed the scoring with an overhead kick on 81 minutes after Latics failed to clear a cross.

Latics’ 3,000 strong away following had sung their hearts out throughout and had backed the team magnificently but it was just not to be their day.

Wigan were unchanged from the line-up which defeated Brentford although the returning Yanic Wildschut was named amongst the substitutes.

United’s strength in depth was demonstrated by their ability to make nine changes from their League Cup semi-final victory over Hull City and still field a high calibre and very experienced line-up.

The Championship team acquitted themselves very well in the opening half and probably had the better chances to take the lead.

Callum Connolly forced a good save from Sergio Romero after Dan Burn set him up from Max Power’s free-kick on 11 minutes.

Latics’ best chance came on 54 minutes when Romero spilled Connolly’s right wing cross to David Perkins on the edge of the area and the midfielder’s low drive was well saved by the United keeper.

Just when it looked as though the teams would be heading into the interval level, United struck.

Schweinsteiger’s cross found Marouane Fellaini at the back post and the big Belgium midfielder headed past keeper Jakob Haugaard.

Latics resilience had been broken and United doubled their lead on 57 minutes with another header, Chris Smalling this time on the end of Anthony Martial cross.

The visitors introduced Yanic Wildschut after the goal in place of Perkins but the winger was unable to make much impact on United’s back line.

It was comfortable for United now and they scored a fourth on 81 minutes when Wayne Rooney’s corner was knocked on by Ander Herrera and Schweinsteiger’s overhead kick beat Haugaard from close range.

The scoreline was a little harsh on Latics who had matched their opponents for long periods but they just couldn’t sustain the level of performance against United’s quality.

Latics must now focus on Championship survival and bounce back to winning ways against play-off chasing Sheffield Wednesday on Friday night.