Book review: Tangerines and Pies – The story of the 2015/16 football season for Blackpool and Wigan 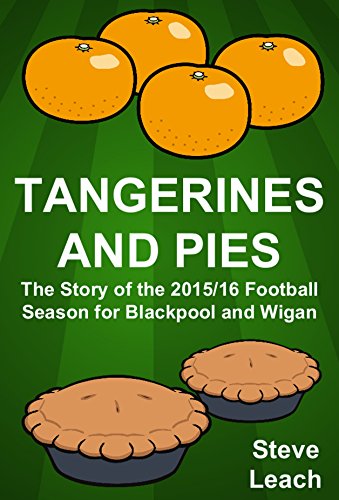 This quietly published book chronicles Wigan Athletic’s successful League One title winning campaign and contrasts it with the travails of local rivals Blackpool during the 2015/16 season.

Both clubs have enjoyed the limelight of the Premier League but during 2015 they were both relegated from the Championship to League One after some disastrous performances both on and off the pitch.

The chairmen of both clubs received FA bans for their racist remarks and defamatory texts, whilst managers came and went at a rapid rate.

The book’s general premise in following the differing fortunes of the two Lancashire clubs is a good one. There are many similarities between the two clubs but also some striking differences.

Both of the clubs are owned by wealthy local businessmen with Dave Whelan at Wigan and Owen Oyston at Blackpool. Whelan is generally well regarded by the Latics supporters, despite his misjudgments when Malky Mackay was the manager.

The Oyston family, however, are loathed by many Tangerines supporters, who accuse them of putting their business interests before those of the club and allowing it to fall into a decline.

In March 2015, Dave Whelan handed over the chairmanship of the club to his 23-year-old grandson David Sharpe. Owen Oyston’s son Karl became chairman in 1999 but his 82-year-old father remains on the board.

It is accurate to say that both Dave Whelan and Owen Oyston are still very influential at their respective clubs.

Both clubs had new managers for the 2015/16 season, with Gary Caldwell at Wigan and Neil McDonald at Blackpool and both clubs had retained relatively few of the previous season’s playing staff.

The prospects for both teams were predicted to be at the opposite ends of the League One table, with the Tangerines struggling near the bottom and Latics amongst those challenging at the top of the table.

The author provides useful portraits of the two towns with reference to what diverse authors such as George Orwell, J.B.Priestley, Bill Bryson and Stuart Maconie have said about them.

There are short histories of each club and interviews with those closely involved with each club. For Blackpool Christine Seddon from the Blackpool Supporters Trust and William Watt from the Blackpool Gazette give their views and from Wigan chief executive Jonathan Jackson and Martin Tarbuck from The Mudhutter fanzine were interviewed.

The author provides a fairly accurate commentary on the events both on and off the pitch although he does sometimes stray into ‘Better in my day’ and ‘Grumpy old man’ territory at times, with his aversion to choreographed goal celebrations; the Johnstone’s Paint Trophy; being put off going to matches when it’s raining and getting lost in the metropolis that is Wigan!

This true story reaches a dramatic finale on the 30th April 2016 at Bloomfield Road when the contrasting fortunes of the two clubs are put into sharp relief as Wigan clinch the League One title and Blackpool are all but mathematically relegated to League Two.

Overall the book is a worthwhile reminder of Wigan’s enjoyable title winning season for their fans, but perhaps less so for Blackpool fans that might not want to be reminded of their relegation and their continuing boardroom problems.

Tangerines and Pies – The story of the 2015/16 football season for Blackpool and Wigan by Steve Leach, Published by Bennion Kearny, Price £9.99.

This review was published in the March/April 2017 edition of Late Tackle magazine.