Latics are back on track – Wigan Athletic 1 Bradford City 0 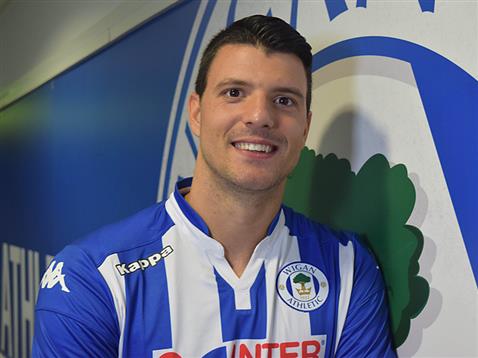 Haris Vuckic got Latics back on track. Photograph courtesy of Wigan Athletic

After three consecutive draws Wigan got back to winning ways with a hard fought 1-0 victory over promotion rivals Bradford.

Yanic Wildschut went closest for Latics in the first half when his 25 yard effort smashed against the post.

Billy Clarke fluffed a chance for the Bantams when he failed to make contact with Jamie Proctor’s cross after the interval.

But just when it looked like the game would end in stalemate substitute Haris Vuckic produced a cool finish from a tight angle to secure an important three points for Latics.

Wigan extend their unbeaten run to 16 games and remain second in the table, six points behind leaders Burton and ahead of third placed Walsall on goal difference. Bradford slip down to seventh in the table.

Bradford had the first chance of the game after two minutes, when Kyel Reid tested Jussi Jaaskelainen with a low effort.

Latics responded and Yanic Wildschut nearly put Latics ahead when his low drive smashed against the post.

The Flying Dutchman picked the ball up on the left hand side and cut inside before unleashing a 25 yard drive, which beat Ben Williams but rattled against the left hand post.

The game was developing into a physical contest with both teams making some robust challenges.

Latics were edging the possession and creating the better chances. Ryan Colclough went close when he cut inside from the right and hit a low effort which was saved by Williams.

The teams went into the interval level but the Bantams started well at the beginning of the second half.

They had a great chance when Proctor crossed for Clarke, but the striker failed to connect properly from six yards out and the opportunity went begging.

Latics were now dominating possession but failing to create many clear cut opportunities as Bradford were proving difficult to break down.

The game looked to be heading towards a stalemate, but Latics showed their character and determination to get the winner with ten minutes remaining.

Substitute Haris Vuckic was played through by fellow substitute Craig Davies, and the Slovenian forward ran past keeper Williams to produce a very cool finish from a tight angle.

Bradford made a triple substitution bringing on Mark Marshall, Wes Thomas and James Hanson in an attempt get back into the game, but despite a couple of nervous moments, the Latics defence held firm for an important victory.