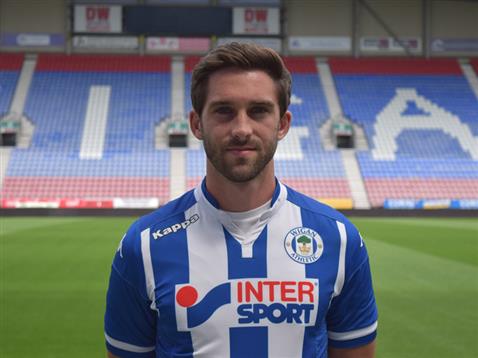 Wigan Athletic extended their unbeaten run to twelve games and increased the pressure on league leaders Burton Albion as they eased past Bury 3-0 at the DW Stadium.

First Will Grigg headed home on seven minutes after great work by Yanic Wildschut, and Ryan Colclough scored his first goal for Wigan after 10 minutes with a superb drive from the edge of the area.

Grigg then added a third from the penalty spot, after being brought down in the box by Bury keeper Ian Lawlor.

Wigan continue to get stronger and they are now only two points behind Burton who were held 0-0 at home by Walsall.

Latics made two changes from the team which won at Walsall with Yanic Wildschut and Reece Wabara replacing Conor McAleny and Donervon Daniels.

Latics might have gone ahead as early as the third minute when Will Grigg met Wildschut’s low cross at the near post but a combination of a Bury defender and keeper Lawlor somehow denied the striker.

Wildschut was proving to be massive threat and Latics went ahead when the Flying Dutchman out paced his markers and put in a perfect cross for Grigg who headed home at the near post.

Two minutes later Latics doubled their lead when Ryan Colclough produced a fine individual goal cutting in from the right hand side and driving the ball into the bottom left hand corner of the Bury net.

Wigan were unstoppable and they added a third from the penalty spot on 21 minutes.

Grigg broke free in the box and was rather unnecessarily brought down by the keeper Lawlor. The Irishman finished coolly into the top right hand corner despite having the pressure of missing his last penalty at Sheffield United.

Bury tried to respond and produced a half chance on 25 minutes when Tom Pope had a header just wide of the target.

In the 27th minute Latics fans rose to applaud James France, a life-long fan who passed away last week at the age of 93.

On 42 minutes Chris McCann nearly added to the lead when he broke through the Bury defence and fired a low drive inches wide of the far post.

Just before the interval Jussi Jaaskelainen produced a breathtaking double save. First the 40-year-old keeper denied Danny Mayor from 7 yards, before he got back up to deny Tom Pope’s shot from even closer range.

But Latics still had time to create more chances. Max Power curled a free kick from 25 yards out which was well saved by Lawlor.

Then from the resulting corner a goalmouth scramble ensued with Grigg and then Wildschut somehow unable to find the net from close range.

Bury tried to get back into the game at the beginning of the second half and Jaaskelainen pulled off an excellent save to deny Lowe at the near post.

Latics had a great chance soon afterwards when Grigg broke free down the left hand side, and then cut into the area but his rising drive crashed against the crossbar and away to safety.

Bury were working hard to keep the score down, but Latics hit the woodwork once again on 70 minutes when Colclough cut the ball back to Max Power and the young midfielder smashed the ball against crossbar.

Power had another effort well saved by Lawlor’s feet as Latics somehow failed to increase their lead in the second half.

As the game moved into added time a mass brawl broke out after a bad challenge on Max Power. Four players were subsequently booked, with three for Bury (Andrew Tutte, Danny Mayor and Craig Jones) and one for Latics (Craig Davies).

Latics continue to build momentum at the top of the table, they are closing the gap on Burton and they are now four points clear of Gillingham and Walsall. On this form automatic promotion is surely within their grasp.