Posted on November 1, 2015 by ianhaspinall 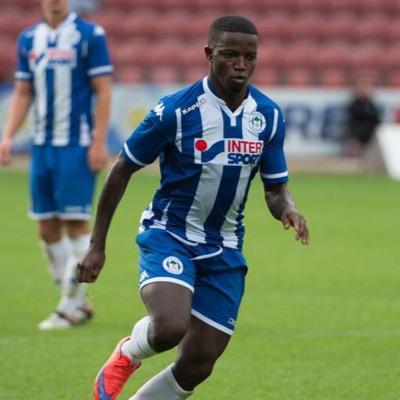 Francisco Junior on target for Latics with a late winner

A 96th minute winner by substitute Franscisco Junior was enough to give Wigan Athletic all three points against second bottom Swindon Town.

Latics dominated proceedings throughout, but the Robins were always dangerous on the break and hit the post through Ben Gladwin in the first half.

Yanic Wildschut, Will Grigg and Reece James all had good chances to give Latics the lead before Junior struck with a dramatic late winner.

Gary Caldwell made one change to the team which drew at Bradford City, with Manchester United loanee Donald Love replacing Leon Barnett. Haris Vuckic and Francisco Junior returned to the bench.

Latics attacked from the kick off and in the second minute Yanic Wildschut drove forward down the left hand side and fired a shot across the goal.

A minute later Wildschut was again causing more problems when the winger cut inside and squared the ball to Donald Love but the defender’s effort was blocked by a Swindon defender.

Swindon responded and Anton Rodgers had an effort just wide of the left hand post.

Latics were having most of the play and went close again when Michael Jacobs found Grigg and the striker saw his effort skim the far post.

Latics committed players forward and the Robins might have gone ahead against the run of play when Nicky Ajose and Ben Gladwin combined, and Gladwin’s curled effort smacked against the left hand post.

Wigan continued their assault on the Swindon goal and Wildschut tested Vigouroux with a low shot at the near post.

Grigg then set up McCann on the edge of the area but the defender’s effort was too tame to beat the Swindon keeper. Then Wildschut had another try on the left hand side and fired wide from close range.

Latics should have been ahead before half time but they were unable to convert their many chances.

Will Grigg had a great opportunity when he met Jacobs’ free-kick on the right and volleyed wide of goal, and then Wildschut forced another save from Vigouroux.

All square at the interval then. Would Wigan rue all their misses?

Latics continued their dominance at the opening of the second half. Will Grigg nearly gave the home team the lead but his close range effort following a corner was cleared off the line by a defender.

Grigg went close again soon afterwards when he was fed by Wildschut on the edge of the area, but Latics leading goalscorer blasted the ball high over the crossbar.

Swindon were proving to be stubborn opponents and some excessive time-wasting by goalkeeper Lawrence Vigouroux was particularly frustrating for the home fans.

But Wigan continued to press and went close again ten minutes from time when Reece James forced Vigouroux into an excellent save and then fired the rebound over the crossbar.

The Swindon keeper continued to waste time at goal kicks and was eventually yellow carded by referee Nigel Miller in the 93rd minute.

As the game moved into the 96th minute Wigan got their just rewards. Francisco Junior took advantage of a mistake by Vigouroux and forced the ball home from close range to seal a last gasp victory.