Book review: Whatever happened to Billy Parks? A football novel with a heart and soul

Posted on September 3, 2015 by ianhaspinall 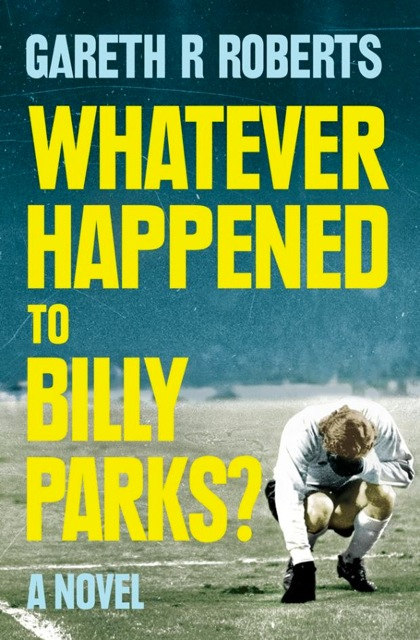 Whatever happened to Billy Parks? By Gareth R Roberts is a fictional account of wasted talent but with the possibility of a remarkable redemption.

Right from the beginning we are emotionally drawn to Billy; he has a difficult upbringing and his football success comes as a welcome relief. We care about him as we follow his developing football career, and relationships with his family and friends. Then his self-destructive tendencies start his degeneration into drinking and womanising. Finally there is an opportunity to make things right.

West Ham’s Billy Parks life follows a similar path to 1970s football icons like George Best and Stan Bowles. He is a faded terrace hero who has neglected his family and is heading towards an early grave.

After his playing career has ended his liver is failing and he earns his money selling football stories on the after-dinner circuit to anyone who’ll listen and buy him a drink. His family has deserted him and his friends are tired of his lies and excuses.

But then comes a fantastic occurrence to make things better. Billy is given the chance to reverse the dark night of 17th October 1973 when England were unable to beat Poland and qualify for the 1974 World Cup finals in Germany.

That night he was left on the bench but what if he could go back in time and win the game for England? What if he was able to undo the pain he’d caused his loved ones?

The book has been described as a British version of the baseball novel Field of Dreams but the difference is that, while Field of Dreams was concerned with changing the future, this is concerned with changing the past. But both stories acknowledge the transformative power of sport, the effect that it has on people’s lives, and both stories are about ghosts.

Throughout the book there is a welcome nostalgia for the football heroes of bygone times, the World Cup winners of 1966, the great football managers of the 1970s ‘ The Council of Immortals’ Ramsay, Shankly, Revie, Clough and Busby.

Some of the football passages are reminiscent of the bygone comic strip heroes Roy of the Rovers and Billy’s Boots. These passages manage to convey the adrenalin rush of beating the opposition and of scoring a goal for both players and fans. For example, when young Billy is playing for London Boys versus Manchester Boys:

“ Ahead of me was a mass of open field. Instinctively, I knew that if I hoofed it forward the wet pitch would stop it carrying through to their keeper. I knew it and I did it: I hoofed it towards  the edge of the penalty area where it stuck in the mud. Now, there was just a foot race to the ball between me, northern monkey Feeney, who was charging from my left, the Manc goalie Joe Corrigan and Big Tommy Booth. But I was away, my feet gliding across the glistening grass, water sputtering upwards as I went. Out of the corner of my eye I could see Feeney coming towards me, while straight ahead was the massive frame of Joe Corrigan. If Joe had been more decisive, he’d have got there first, but he held off for just a second, just long enough for me to reach the ball a moment before he did, a tiny weeny insignificant moment in the encyclopaedia of time, but long enough for me to clip the ball over him, hurdle him, and steer the ball into the empty net as Feeney crashed into his own goalkeeper. ”

There are also details of fixtures, dates, venues, team line-ups and historically accurate references to give the story added realism.

The book certainly packs an emotional punch and has won the Jerwood Fiction Uncovered Prize and was Longlisted for the Gordon Burn Prize. ‘Whatever happened to Billy Parks?’ deserves a place alongside the best football novels of the modern era, Nick Hornby’s ‘Fever Pitch’ and David Peace’s ‘The Damned United’.

* Whatever happened to Billy Parks? By Gareth R Roberts is published by the Friday Project and is available on Kindle and in paperback.

** This article was originally published in the Daisy Cutter in August 2014.