12th Man: Reading between lines we are back! 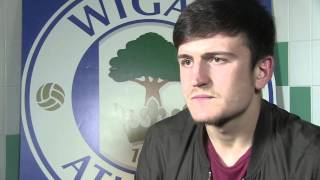 On loan defender Harry Maguire made a promising debut

Tuesday night’s 1-0 win at Reading has given everyone renewed hope that Latics can escape the drop to League One. It was a spirited and hard-working performance which closes the gap between themselves and their rivals.

The win at the Madejski Stadium was perhaps surprising after the recent debacle at Nottingham Forest when Latics were thoroughly outclassed by a fairly average team.

Pressure had been mounting on manager Malky Mackay and he was certainly a relieved man after his team secured their first three points of 2015. However, questions will remain about whether he is the right man to lead the club going forward.

Reading put in a poor performance after their FA Cup exertions defeating Derby County at the weekend and if Latics had encountered them on another day the result might have been different.

The large turnover in playing staff under Mackay is a big risk at this stage in the season and with some players such as Harry Maguire coming in on short term loan deals there is bound to be a lack continuity.

Emyr Huws had started to create a partnership with William Kvist in midfield but an ankle injury has ruled him out for the rest of the season. New loan signing Chris Herd has had to be withdrawn through injury in each of his three games and was stretchered off at Reading, so is now likely to miss the rest of the season.

Latics line up continues to be unsettled and it is clear that Mackay doesn’t yet know is best starting eleven.

At Reading Marc-Antoine Fortune started upfront with Leon Clarke and Sheyi Ojo coming into midfield with another new signing Kim Bo-Kyung dropped to the bench. New striker Billy Mckay was once again only allowed a cameo role at the end of the game.

Looking more positively the debuts of Jason Pearce and Harry Maguire as the new centre half pairing offers much promise. Between the sticks Ali Al-Habsi has been in good form since returning to the team and his performances have added much needed stability to an ever changing back four in front of him.

There is no doubt that it was a battling performance at Reading, but Latics will also need to show more quality on the pitch if they are to pull away from the relegation zone.

They have only won two games in 17 fixtures and have not won at the DW Stadium since August. It is too early to tell if they have turned the corner.

If they are to escape the drop they must put together a winning sequence of results starting at home to Charlton on Friday night.

This article was first published in the 12th Man column for the Wigan Evening Post on 20th February 2015.