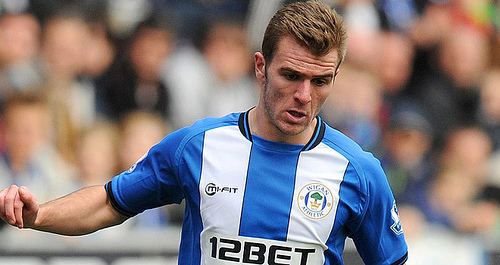 Wigan remain in the relegation zone after they slumped to their fifth defeat in seven games under manager Malky Mackay losing 1-0 to Sheffield Wednesday at the DW Stadium.

Following another lacklustre performance by Latics the game appeared to be heading towards a stalemate until substitute Callum McManaman was sent off within 10 minutes of coming onto the pitch.

With Wigan reduced to ten men the Owls seized the ascendancy and Atdhe Nuhiu headed the winner eight minutes after the red card.

Malky made one change to his starting line-up from the team that won at Leeds United on Boxing Day with Adam Forshaw replacing Don Cowie in midfield.

Neither team gained the advantage in the opening stages although Latics enjoyed plenty of possession.

But in the 19th minute Wednesday were almost gifted the lead when Jacques Maghoma capitalised on Rob Kiernan’s poor pass. The winger stormed down the right and crossed towards Atdhe Nuhiu but the big Austrian striker somehow failed to capitalise and Ivan Ramis cleared the ball off the line.

Wednesday had another opportunity 15 minutes later when Lewis McGugan picked up the ball following Ben Watson’s mistake and fired an effort from distance, which took a deflection and went narrowly wide of Scott Carson’s post.

Latics had a half chance just before the interval when Chris McCann’s header towards the back post nearly found Marc-Antoine Fortune, but the Wednesday defence managed a hasty clearance.

Neither team had gained the upper hand by half time and the second period began in similar fashion with Latics having plenty of possession but they failed to threaten until 15 minutes into the half. James McClean broke down the left and brought a full length save from keeper Keiren Westwood.

Latics thought they had gone ahead four minutes later from a free kick. The ball was delivered into the near post with McClean getting the final touch, but the linesman flagged for offside.

McManaman replaced Fortune on 59 minutes and within ten minutes the winger saw red for a reckless two footed challenge on Claude Dielna. McManaman had been dismissed for a similar offence at Bournemouth last season. It is now becoming a worrying part of his game and he must learn to curb his temper or he will never fulfil his undoubted potential.

The red card was turning point and the Owls made the breakthrough thirteen minutes from time when Nuhiu met Jeremy Halen’s deflected centre to head home.

Wednesday should have doubled the lead in the 83rd minute, when Carson’s challenge from outside the area fell to Chris Maguire but the midfielder fired wide.

Wednesday held on for the three points and move up the 10th in the Championship table. Latics sit second bottom in the table and three points behind fourth bottom Brighton.

Wigan will be glad to see the end of 2014. The off-the-field blunders have been matched by the team’s sorry decline from promotion favourites to relegation candidates. Surely things can only get better in 2015, can’t they?