Posted on November 2, 2014 by ianhaspinall 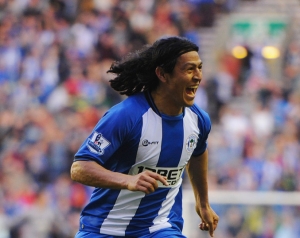 Roger Espinoza on target for the Latics

A late penalty by Bryan Ruiz denied Wigan all three points in a pulsating 3-3 draw with Fulham at the DW Stadium. Fulham’s Ross McCormack was dismissed after two yellow cards and Wigan’s Leon Barnett was given a straight red after bringing down Hugo Rodallega in the penalty box.

Latics went ahead through a Adam Forshaw penalty after Callum McManaman had been fouled. The Cottagers drew level from Lasse Vigen Christensen and then went in front before the interval when McCormack’s perfect pass found Ruiz at the back post and the Costa Rican chested home.

In the second period Wigan responded to the challenge with Roger Espinoza’s superb 25 yard strike and then went in front through substitute Shaun Maloney’s close range finish, but Fulham ensured the points were shared when Ruiz converted his spot-kick.

Wigan retained the same team that won away at Derby a week ago, and immediately set about replicating the same pressing game that had been so effective last time out.

Latics were in front within nine minutes from the penalty spot when Callum McManaman was brought down in the area.

McManaman made a jinking run into the box causing panic amongst the Fulham defence, before being brought down by Konstantinos Stafylidis for a spot kick. Wigan had missed their last two penalties but Adam Forshaw took responsibility and despatched the ball down the centre of the goal past Bettinelli for his first goal for the club.

Wigan could have been two ahead when Marc-Antoine Fortune’s low cross just evaded McManaman in the area.

However, the visitors soon upped their game and started the threaten the Latics goal.

Former Latic Hugo Rodallega and Elsad Zverotic had attempts on goal before the Cottagers drew level through Lasse Vigen Christensen, who was played in by Rodallega’s through ball to side foot past Scott Carson.

Five minutes later Fulham were ahead when Ross McCormack’s perfect chip to the far post was chested over the line by Bryan Ruiz.

Fulham were now in the ascendancy and Latics were lucky to go into the half time break only one goal behind.

Wigan improved their game at the start of the second half and returned to the pressing game that had been so effective at the beginning of the first half.

McManaman created an opportunity for Don Cowie, but the Scot couldn’t quite get his header on target.

But Wigan drew level with a superb 25 yard volley from Roger Espinoza on 54 minutes. The Honduran international was having one of his best games in Latics colours and his second ever goal for the club was a just reward for his endeavours.

The game was now end to end as both teams went for the winner. McManaman went close for Latics and McCormack forced a full length save from Carson low down to his left.

McCormack committed a petulant late challenge on James Tavernier and was yellow carded and minutes later the £11m striker was involved in a bust up with substitute James McClean, which resulted in a red card.

Uwe Rosler introduced Shaun Maloney for McManaman and within a minute the little Scot had given Wigan the lead. Espinoza played an exquisite through ball and Maloney finished with aplomb from close range.

It looked as though Wigan would claim all three points but with two minutes of normal time remaining Latics conceded a penalty. Rob Kiernan misjudged a hopeful punt forward and as Rodallega moved in on goal Leon Barnett brought the Colombian down in the area for a stonewall penalty.

Barnett was red carded and despite a long delay in proceedings, the unruffled Ruiz converted the spot-kick to leave Latics frustrated.

Despite the disappointment with the final result this was another excellent performance by Latics against a very talented Fulham line-up.

With two away games coming up, the main worry for Wigan now will be the suspension of Leon Barnett to add to the current crop of injuries to defenders.