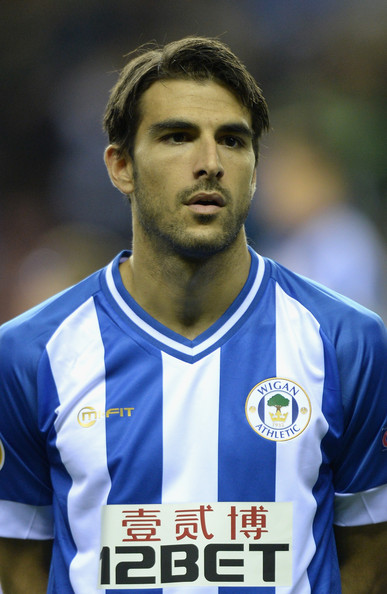 Wigan were frustrated by Queens Park Rangers in the first leg of the Championship play-off semi-final at the DW Stadium.

Latics had the better of the possession and created the best opportunities but they failed to beat former England keeper Robert Green in the Rangers goal.

Jordi Gomez might have given Wigan the lead in the first half but Green saved well from close range and in the second half Marc-Antoine Fortune wasted two good goalscoring opportunities.

Rangers skipper Clint Hill was lucky not to concede a penalty in the opening stages after appearing to elbow Latics defender Rob Kiernan.

Uwe Rösler made eight changes from the side that lost 4-3 at Blackburn Rovers on Saturday with only Scott Carson, Gary Caldwell and Rob Kiernan keeping their places.

In a tense and nervous atmosphere it was clear that Rangers had come determined to defend with a five man back line and often four midfielders parked in front of them.

Wigan struggled to break down the mass of defenders and only rarely threatened to break the deadlock when Gary Caldwell headed straight at Green following a corner and Gomez saw his low drive saved by Green.

Scott Carson didn’t have a real save to make in the first half as Rangers were more intent on time-wasting and petulant fouls than going in search of a victory.

Their first and only real chance came early in the second half when Carson did well to keep out Traore’s snapshot.

But Wigan should have been ahead on the hour mark when Fortune ballooned over a cross from Kiernan and then had another effort blocked by QPR defender Nedum Onuoha.

Rösler introduced strikers Martyn Waghorn and Nicky Maynard for Fortune and McManaman with 15 minutes remaining but neither player was able to break the deadlock.

QPR will now feel that they have a psychological advantage going into the 2nd leg but many of Wigan’s better performances this season have been away from home.

Wigan outplayed QPR in their last fixture at Loftus Road but failed to take the numerous chances they created and subsequently lost the game 1-0.

If they are to avoid a similar result on Monday night they will have to defend resolutely and be more ruthless in front of goal.

Going forward Martyn Waghorn should start in place of Marc-Antoine Fortune and their might be a place for Nick Powell on the bench.

So it’s still all to play for on Monday night. Wigan have upset the odds on many occasions in recent seasons and they are capable of doing it again.