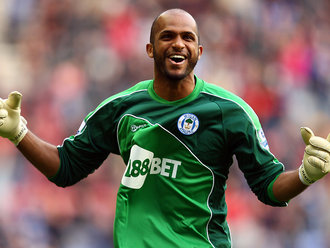 Goalkeeper Ali Al Habsi and Spanish Midfielder Jordi Gomez were the heroes as Wigan moved to the verge of the play-offs with two games in hand on most of their rivals.

Al Habsi saved a first half penalty from Leon Best and Gomez scored a late penalty as the Latics edged past a stubborn Sheffield Wednesday.

It was Latics seventh straight win in all competitions, but for long periods it looked like Wednesday would get something from the game.

The home team were unable to replicate the form that had given them a remarkable FA Cup victory at Manchester City at the weekend and it was the away team who had several good opportunities to take the lead.

The easiest opportunity came when Jacques Maghoma was brought down by Al Habsi, but the Blackburn loan striker Best failed to convert with Al Habsi diving to his right to save the spot kick.

The Omani keeper has become something of a spot kick specialist having now saved eight penalties during his Latics career.

Wigan were relieved to go into the half time interval level, but they did show an improvement after the break. Substitutes Nick Powell and Callum McManaman provided more of an attacking threat.

James McClean and McManaman should have put Wigan ahead, but with only a few minutes of normal time remaining James Perch was fouled by Caolan Lavery and Gomez calmly stepped up to score the vital goal.